The Honda CBR600RR is the company’s 600cc supersport race replica, introduced in 2003 to replace the more street-oriented CBR600F4i and various CBR600 predecessors.  The bike dominated the SuperSport World Championship from 2002 to 2008, with continued championships since then.

The current version has just over 100 horsepower, with a 0-60 time of 2.9 seconds and a quarter mile time of just under 11 seconds. The CBR600 lineup has long been known as an elite series of middleweight sport bikes — often known as “supersports” in the insurance industry — which are notoriously expensive to insure. For this reason, it’s smart to research what your rates will be so you don’t overpay. Incredibly, some users reported their annual rates varying as much as $1000 per year from company to company — for the exact same bike and coverage! For this reason, it’s important to compare quotes from various companies to secure a rate that won’t break your budget. 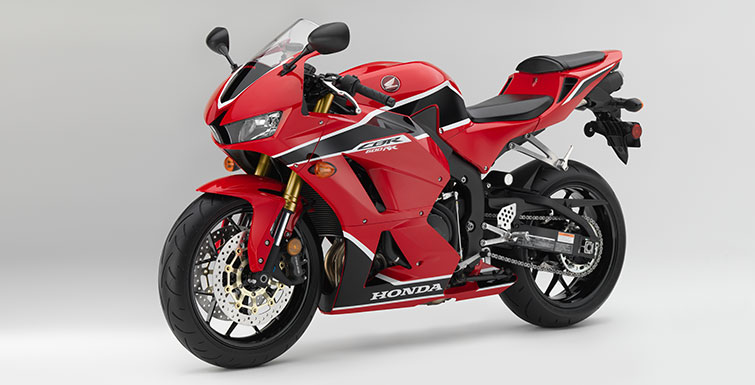 The original CBR600 was introduced way back in 1987, first known as the Hurricane in the States. Variants of the CBR600F series followed. The 600cc Honda sport bike quickly became known as the most practical, user-friendly of the middleweight sport bikes.

Fast forward to 2003, when the CBR600RR was introduced — a more race-oriented middleweight, designed to compete with such rivals as the Kawasaki Ninja ZX-6R, Suzuki GSX-R600, and Yamaha R6 — both on the street, strip, and racetrack. The bike dominated in the World SuperSport Championship, winning ten manufacturer’s crowns since its introduction, but maintained its reputation for Monday-Friday livability.

There have been rumors of the current iteration being discontinued in the near future, both at home and abroad. In recent years, the CBR600 has continued garnering positive reviews, yet it lacks many of the sophisticated rider aids as its competitors and still does not come with a slipper clutch.

Here in the States, liability coverage is a legal requirement in all but a handful of states — though coverage requirements vary.  Importantly, if you finance your bike through a dealer, bank, or credit union, you will, most likely, be required to carry not just liability, but full coverage, which means collision and comprehensive coverage. This is much more expensive, but keep in mind that liability only covers damages to another party — it does not cover any damage to your actual bike.

The best way to keep your rates affordable is to compare quotes from a variety of insurers. Fortunately, we make this a breeze. Enter your zip code below to begin.