We are big fans of Vintage Addiction Crew (V/A), having featured their XS400 cafe racer and DR600 scrambler. One of our favorite things are the shop is that they don’t rely on the same platforms as everyone else. This custom Yamaha R1 is an example of this. Below, we get the full story on the build (translated from Spanish). 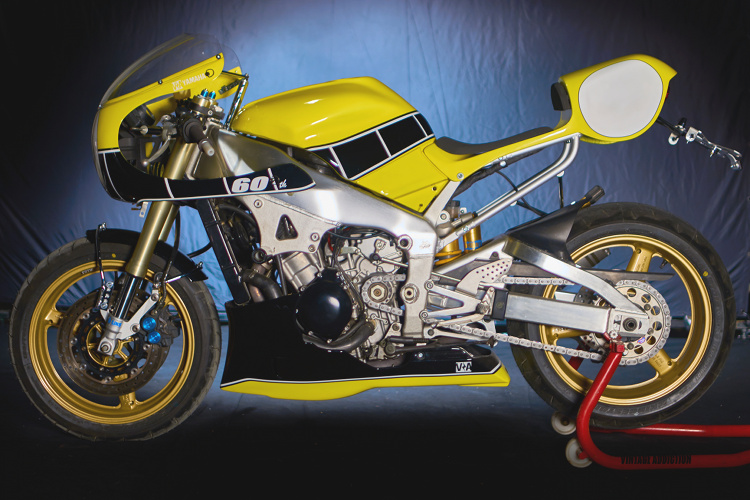 (Words by V/A. Translation and highlights by us.)

At V/A, we are a workshop dedicated to building classic vehicles. In 2012, we fell in love with the cafe racer scene that was growing so strongly all over the world. We decide to take our own path into this world, and since then we have done a wide variety of jobs:  bobbers, off-road bikes, cafe racers, etc. We love being able to dedicate ourselves to it and share our work with everyone.

The motorcycle I present you is a 1998 Yamaha YZF-R1, with a 1000cc carburetored motor and 150 horsepower — a mythical bike in its time. This was an old racing bike — a small team of amatuer that ran it.  They won many races and had many good moments. After that, the team disbanded and Jordi, the owner of the bike and formerly the team’s rider, bought the bike for the appreciation he had and as a memory of those good moments. The bike spent a lot of time saved, until one day it was decided to give a new life to this champion, so Jordi contacted us.

From the beginning, Jordi was very clear the idea he wanted, rejuvenate the outdated appearance and give it a new classic look, but without losing any of its benefits. The inspiration came from the 70s Yamaha racers of Kenny Roberts, of course, always with our personal touch, as we did not want to make a replica.

On the bike we have worked on the new classic fairings — a challenge with a bike that reaches 280km/h.

We have respected all the original measurements of the bike as well as heights to not modify the driving and we have focused on modifying it with higher quality components such as the Ohlins suspensions, the Brembo four-piston brakes (they are not those of the photos), Akrapovic exhaust manifolds and good Dunlop tires.

The bike was completely restored and a good tuning of the engine and transmission was done to make it work as the first day!