Today, we are thrilled to feature the Suzuki DR650 “Retro-Moto” from Spencer Parr of Indiana’s Parr Motorcycles. Hailing from just outside Indianapolis, Spencer was a police officer on patrol for five years before he lost the sight in one eye due to ocular cancer. Now he works as an investigator during the day and builds motorcycles at night. For now, he is a one-man shop operating out of his home garage, but he hopes to expand one day. This Suzuki DR650 “retromotard” is an auspicious step, combining the powerful nostalgia of vintage Suzuki RM bodywork with modern suspension, supermoto wheels/tires, and streamlined electronics.  Believe it or not, Spencer’s first ride on the bike was to the The Reunion Motorcycle Show in Indianapolis, where the Retro-Moto won best in show in the “Made” category. Says Spencer:

“I hope one day I can have an impact on the motorcycle industry like all my favorite builders have. My wife told me, “just go for it”, so that’s precisely what I am going to do.”

We’re 110% behind you, Spencer! Keep building beauties like this and we’ll keep showcasing them! I’m 28 years old and I live just west of Indianapolis. Growing up I raced go karts and rode anything with a motor. I purchased my first motorcycle at age 18 (sportster 883). Many years and bikes later, I became obsessed with motorcycles. My motorcycles have ranged in styling from cruisers, dirt bikes, track bikes, café racers and so on. I started building motorcycles before college and started following Roland Sands who really inspired me.

Throughout college I continued to work on motorcycles getting my degree in criminal justice. Soon, I became a police officer and was on patrol for five years. Out of everything I had seen, nothing scared me more than early 2016. I was diagnosed with ocular cancer, which led me to be blind in one eye. When that happened, it made me realize how precious life is. I only have one life to live and want to do what makes me happy (building motorcycles). I get so much joy from bringing my vision to life through motorcycles. I work a desk job as an investigator during the day and build motorcycles at night. I am a one-man shop working out of my garage but hoping down the road I can be able to get my own spot with a couple more hands. I am excited to learn the craft more and more with every build. There is nothing like the motorcycle community and I am glad to be apart of it. I just started up on social media so be sure to follow me. Thank you very much! The following picture displays my 2003 Suzuki DR650 that I’ve named, “Retro-Moto.” I purchased the bike last November as a completely stock DR650 with less than 5k on the odometer. I looked at the bike, and I considered just putting some street tires on it and taking it on a ride; but I couldn’t stop there. I decided to start a challenging and rewarding project instead. That’s how the bike transformed into a full-frame up build. While I’m a guy who loves the looks, lines, and bold colors of Vintage Motorcycles, I also appreciate the performance of newer machines. With these things in mind I truly focused on showcasing the looks of a vintage Suzuki RM but established the performance of today’s machines in my “Retro-Moto.” When I tore down the bike, I got rid of unnecessary parts to lighten up the heavy DR650; these parts included the exhaust, airbox, and other miscellaneous parts. As I got down to the frame, I de-tabbed it and cut the rear section off. From there I welded mounts for my custom exhaust; then I angled and welded the frame loop to the rear section to make room for the rear-fender. I also made a pan to be mounted under the frame which holds all the electronics including the battery. This part of the process took some time; with the pan being mounted to the bottom of the frame, it only gave me about an inch to hold most of the electronics. Therefore, I integrated more room in the seat. 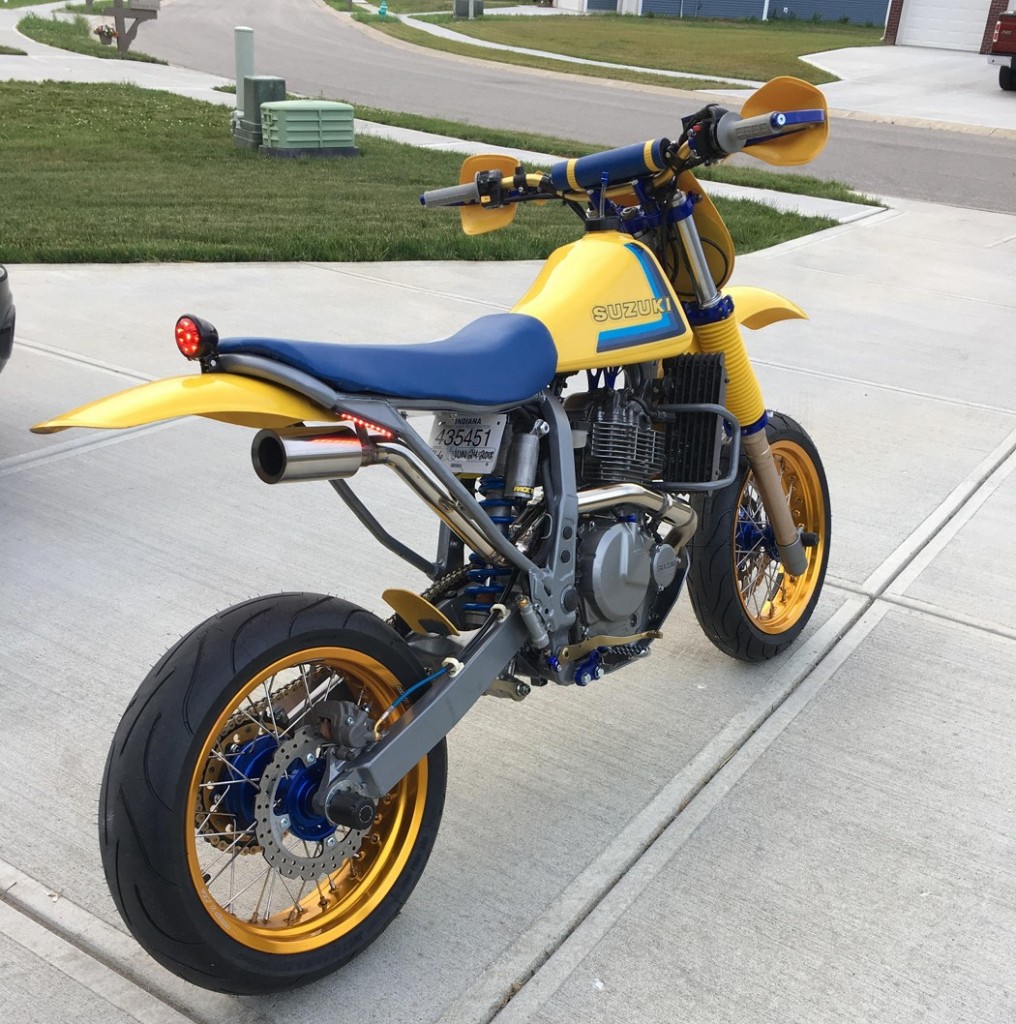 After the frame was complete, I sent it out for powder coat along with other parts. The frame and swingarm were coated in a light grey, while the accent parts were blue and gold. The blue was tough to decide on because I wanted it to be bold and go with the vintage Suzuki yellow bodywork. 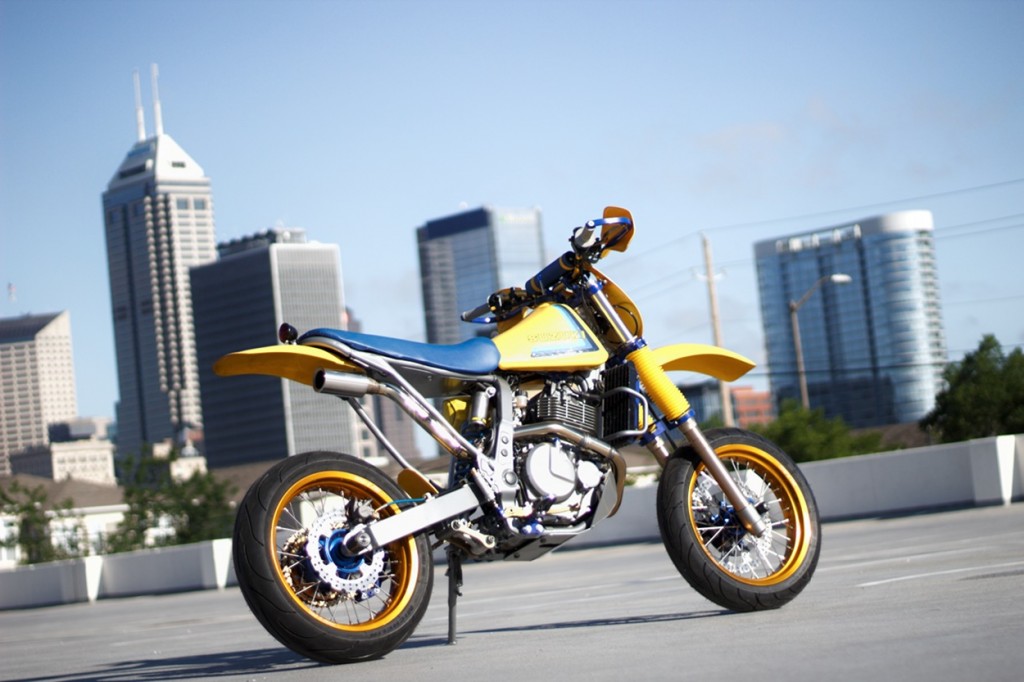 After receiving the parts back from powder coat the fun really began. I rebuilt the front and rear suspension and upgraded it with Racetech suspension internals and springs. I finally was able to see the stance of the bike after outfitting it with Warp 9 Racing gold/blue wheels and Michelin Pilot Power tires. Warp 9 Racing fork brace (Blue), chain guide (Blue), and Apex floating rotors were also installed. The body work is from the late 70s Suzuki RM models which included: the number plate, fenders, and gas tank (79-80 Clarke); minus the handguards that are from a vintage Enduro. Since the bike had low mileage and was in excellent condition, I left the motor untouched. The exhaust is an FMF powerbomb header finished in stainless steel polished to match tailpipe. I made the tailpipe and had it run up the rear section of the frame and out the back. This was my first exhaust I’ve ever made, and I’m very pleased with the way it turned out (she is loud and proud!). The carburetor was upgraded to a DynoJet stage 1&2 kit (for the time being). I wanted the exhaust to stand out and be seen, so I removed the bottom section of the rear fender and made a small splash guard attached to the swingarm. I modified the original seat pan, so I could store some of the electronics (Battery, CDI); then added new foam, and wrapped it in blue vinyl. I worked through the wiring completely, replaced and rerouted things to fit in the minimal space that was available. Other added features were LED lights from front to rear for headlight/taillight and turn signals. The ignition uses a MotoGadget m.lock and the speedometer is a Trail Tech Vapor. The result is something I am proud of. It truly encompasses what I am all about in styling and performance. Fortunately, I got the bike built a day or two before The Reunion Motorcycle Show in Indianapolis back in June. My first ride on the bike was to the motorcycle show! After entering the bike in the show, it won the best in the “Made” category. After winning my category at The Reunion Motorcycle Show, I knew this is what I want to do with my life someday. Currently, I work as an investigator during the day and build bikes at night. Shout out to locals: Keith Carlson and Steve Hoy (Hoy Vintage Cycles & Powersports), who inspire me with their knowledge and motorcycle builds. I hope one day I can have an impact on the motorcycle industry like all my favorite builders have. My wife told me, “just go for it”, so that’s precisely what I am going to do.