Kaspar Ilves is the founder of Estonia’s Kalapea Garage. He works in the family business of forestry equipment sales as his day job, but has been trading, selling, track racing, and repairing bikes since his teens. Along the way, he developed a keen love for Italian bikes — Ducatis, in particular. Soon he began customizing bikes, which has become his main focus:

“Building motorcycles is not my main job, but I would say it’s a hobby that has gone out of hand…” The build you see here started as a Ducati Hypermotard 796 basket case — the bike has been wrecked and was in boxes. Kaspar was planning to part out the bike until he spoke with a fellow “Ducatista” who wanted a bike to ride across the trail roads of Europe. Soon, the vision was clear:

“To build a bike that is bigger and has better performance compared with the original Ducati ‘Scrambler’ model.” The result is the Ducati “Hyperscrambler,” which features a large-capacity Moto Guzzi tank, standalone ECU, upgraded power, and our favorite addition, luggage boxes made from metal fuel tanks, which required a bus trip to Russia to purchase! The tanks have been hinged, lined, and waterproofed, and mount to a modular custom luggage rack — bravo!

Below, we get the full story on this build! So I am Kaspar, from small dot on the map called Estonia. Yes, we made Skype and Hotmail — no, not from Russia and do not speak Russian 🙂

I’m in my late twenties, degree in informal technologies but work in a family business dealing with forestry equipment sales and spare parts. Building motorcycles is not my main job, but I would say it’s a hobby that has gone out of hand.

I started riding bikes very young. As I needed more and bigger bikes (for example, when I was 15, I had a Yamaha FZR600), I started trading my way up. Trading, selling, track racing and repairing (also somewhat crashed) bikes, I had improved my skills, made some pocket money, and had some cool bikes along the way.

Somewhere along that way I also discovered my love for Italian bikes. My first Italian bike was a Cagiva Mito. When I sold it, I bought two of them to relieve my pain 🙂 Then came many Ducatis and when I was 21 I traded myself my dream bike, Ducati 749S, that I still have.

After many years of doing this, I got bored, I started adding my style and touch to bikes and people noticed it. The word started spreading, some friends who wanted custom paint and then their friends wanted some bits, and so on.

Now I’m trying to focus just on custom bike building. I like to do all things myself, from beginning to end. That means all design, mechanics, electrical and paintwork is made by myself. I like improving my skills and learning along the way by doing this.

Example, most of the bikes’ paint jobs have been changed from initial thought while painting it. Problem could be that I can’t explain the design that is in my head to somebody who could understand same way as I do, but by doing all myself I can be sure of the quality and end result. For me it is also important that the bikes I build will run and handle perfectly; there is no use for a bike that only looks good but runs like crap. Project started with crashed and disassembled Ducati Hypermotard that was packed into boxes. Initial thought was to sell it in bits or use as donor. But as I got talking with a Ducati-obsessed guy who wanted a scrambler, I offered it as a base. Vision was to build a bike that is bigger and has better performance compared with original Ducati “Scrambler” model. All this was necessary as the owner wants to ride this bike across Europe’s trail roads. Build began and all the plastic parts were trashed. The main element of the design was chosen and that was a Moto Guzzi V7 tank. This tank had perfect square lines to fit with the Ducati trellis frame. Guzzi tank was chopped, widened, and custom base was made for fuel pump and mounts. It all resulted in about 28L fuel capacity that is perfect for long trips. Rear subframe follows trellis style and has classic scrambler hoop on the back. All metal fenders from a Suzuki GN were chosen after cutting and widening. Into rear frame was also integrated mounts for luggage rack. Talking of luggage, it was owners request to have metal fuel tanks used as luggage box. As those authentic military style tanks were still only made in Russia, we had to get them from there, so after one bus tour later to St. Petersburg we got two pieces of 20L and one 10L tank with racks. 20L tanks were cut open, added hinges/locks, lined inside and fitted gaskets for waterproofing. Rack was designed to be slick, modular and easily removed, so in 5min and after few bolts you would have city commuter. One unexpected challenge was instruments and ECU. Ducati uses linked system that needs both ECU and instrument cluster to be connected and programmed. If you remove instrument cluster the ecu can’t get immobilizer signal and won’t function. Original dash was broken after crash, and it left us with few options:  program the ECU to not use immo (nobody could do that), buy a new dash from dealer (800€), or to use standalone ECU. As original hypermotard dash is too modern for classic scrambler, it was easy choice, we went for standalone programmable ECU and Acewell dash. ECU is Ignitech, that provides us control over all engine parameters. That was great choice regarding power aspect of this bike (we needed more). Changes of fuel and ignition mapping were needed as original airbox was removed and custom ram-airbox was made to fit K&N filters. Catalytic converter was removed along with lambdas using LeoVince header kit. Exhaust is ZARD from Scrambler, originally low mounted, but it was modified to be high mount with some custom exhaust tubing. As the ECU was replaced, wiring loom had some significant changes ahead, so to ease wiring and add some gizmos, Motogadget M-Unit Blue was used. Also to keep classic styling, Motone handlebar switches were used. Tires were hard choice as Hypermotard has 180 width rear tire that limits options. We liked to use aggressive Pirelli TKC80s, but as bike has to do urban and highway riding also, Pirelli MT60s were chosen. Paint scheme was chosen quite radical, considering that standard for Ducatis should be shiny Italian red NOT matte olive green with rusty spots, but it works as time to time guys come to ask how old is this thing or did you find it buried? Engine and other parts got fine matte black finish and aluminium parts were anodized black. By adding also some shiny bits like, CNC levers, rearsets, Highsider mirrors, Renthal fatbar, LED lights and so on, we got completed bike that tuns heads, performs as expected, has tons of power, is fun and comfortable to drive. More Photos of the Jerrycan Luggage 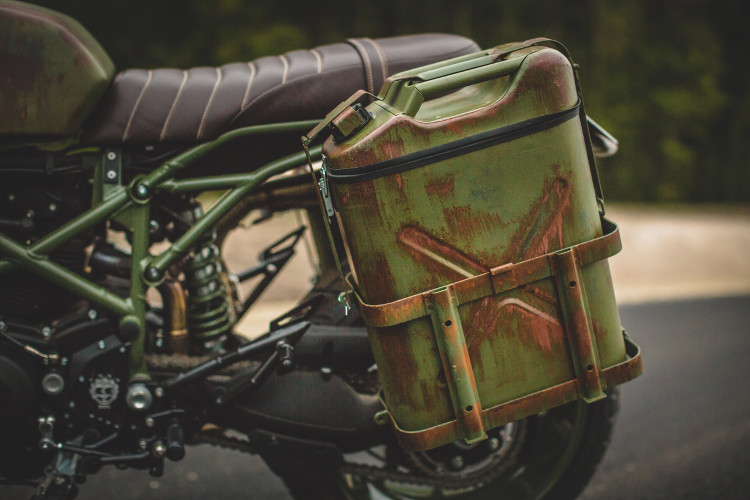