A father’s bike reborn and transformed…

We can say from experience, there’s something special about owning and riding a bike your father owned — particularly if the man has passed on. So it was for Paul C. (@half_fast_scrambler) of Missouri, who pulled his father’s 1981 Suzuki GS450L out of a dusty warehouse after some twelve years in storage. He got the machine running and rode it for more than a decade — never really loving or hating the machine itself — until it dawned on him to turn the old GS into a bike he’d really enjoy riding, perhaps a desert sled or scrambler with two-up capability, so that he could take his young son for rides. 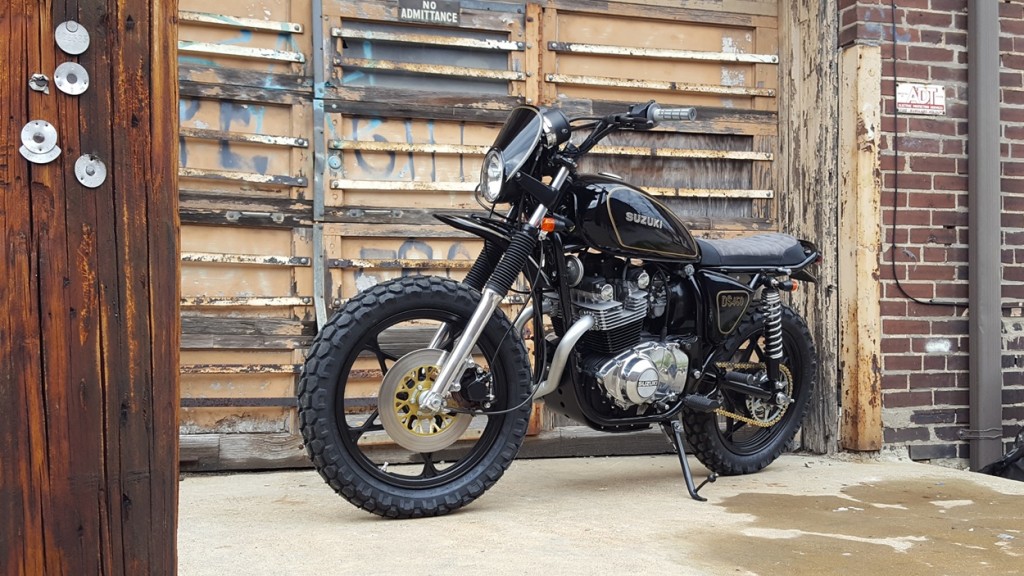 Paul sought out one of our favorite builders, Bj English of Missouri’s Brick House Builds, who is no stranger to scrambler builds. As Paul told Bj:

“Not really wanting a show bike, just build my dad’s old bike into something to blast down some gravel roads and tear up some trails on.”

Together, they formulated a plan to transform the GS450 into a highly-functional everyday scrambler. Says BJ:

“What you see is really on of the cleanest and most usable bikes I have made to date. It is an absolute hoot on and offroad with just the right amount of power and weight for an older dual sport.” 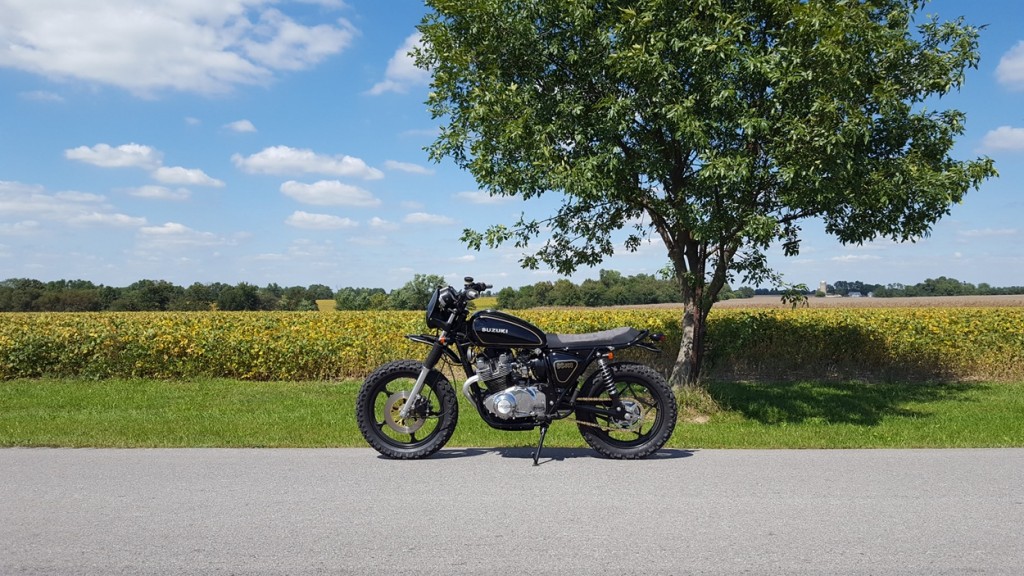 Following @half_fast_scrambler on the ‘gram, it’s clear that Paul uses the bike just as intended, regularly burning up gravel lanes, dirt tracks, and backroads around his home in Missouri. Below, we get the full story from both Paul and Bj on the build.

In the Owner’s Words…

This was my dad’s bike, the bike I grew up riding on the back of for trips to the country store for milk and cigarettes. I really don’t know when my dad bought this Suzuki (I believe mid-to-late ‘80s) or why of all makes and models he chose a 1981 Suzuki GS450L.

I think I only piloted this bike once back then, for a short run up the highway. After I outgrew a Honda XR80, I graduated to a dual-purpose 1987 Suzuki SP200 which I rode incessantly.

After my dad passed in 1994 at age 47 — I was 17 — the bike sat for about 12 years in a dusty warehouse before I had the idea to get it running. In that time I had moved to Colorado, then back to Missouri but across the state in St. Louis. I had taken the SP200 to Colorado, eventually sold it out there, and had been wanting a motorcycle again. 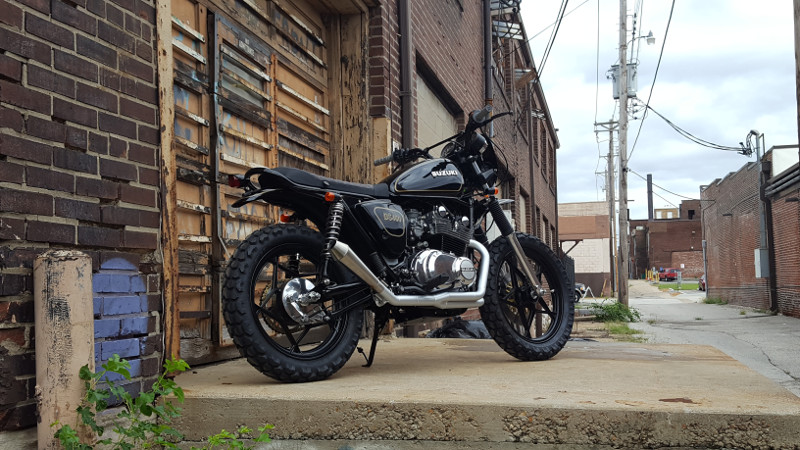 I mentioned the old Suzuki to my brother, who got it out of storage, put gas and a new battery in it, and the old bike fired right up. I believe it had just 6,700 miles on it. After he brought it to me in St. Louis I went through the carbs, had tires put on, and it’s run like a top ever since.

I’ve been riding this bike for about 12 years now, never really loving it or hating it, but not wanting to get rid of it either, being my dad’s old bike. Nothing about it to love or hate — it was just an average little bike from an average era in motorcycle design. Then on a ride last year it dawned on me that I could turn it into a bike I’d really enjoy owning and riding — maybe a classic scrambler or desert sled — something with some off-road capabilities. After all, I always missed my old Suzuki SP200 after I sold it.

So I researched some ideas to get a general direction for the build, talked to a couple different bike builders, and ultimately picked BJ from Brick House Builds based on his excitement for the project, his likability, and his fantastic portfolio of builds. “Not really wanting a show bike,” I said, “just build my dad’s old bike into something to blast down some gravel roads and tear up some trails on.” Fast forward a few months of collaboration, and the first time I saw the reimagined little ripper was at the 2018 St. Louis Cycle Showcase (@csstl), among builds by custom motorcycle heavyweights like Craig Rodsmith and Indian Larry. Unbelievable.

It’s been a great transformation and I couldn’t be happier, but one of my favorite things about the build is what BJ did with the fly screen. A few years ago I happened to notice some writing under the dust on my dad’s old helmet, which had been sitting on a shelf in my garage. Written large and in pencil, it says simply — and somewhat eerily — “Doug Caudell was here, 7:00 pm, 21 Sept ‘92”. Huge lump in my throat at the time, and though I’ve thought about it a lot, I’ve never quite known what to make of it. It’s like he was hanging it up for good, or somehow knew it was his last ride. Anyway, I asked BJ if we could incorporate that into the bike somehow, but to keep it subtle, and I trusted him to his devices and creativity. So during the big reveal at Cycle Showcase, I noticed on the flyscreen, in black vinyl lettering under the black paint and clear coat, “DLC was here 21 Sept ‘92” which I think makes a subtle and perfect tribute to my dad.

After lots of discussion, Paul and I formulated a plan for the bike and had a solid direction to work toward over the next months. The first order of business was to address the boring cruiser lines of the bike with repositioning the fuel tank to follow the frame. It was dropped in front and raised in the rear to give it that level bottom line that is pleasing to the eye.

From there we moved rearward to modify the end of the frame where most of the changes are. Paul has a young son and wanted the ability to take him for rides so the bike had to be 2 up capable which added a challenge. I fitted some longer heavy duty Progressive shocks to raise the bike and then began molding on an upswept hoop to visually end the bike but also act as a grab handle for the passenger. It is a bit different but I love how it turned out! A clean steel fender was fitted and then topped with a clean taillight. 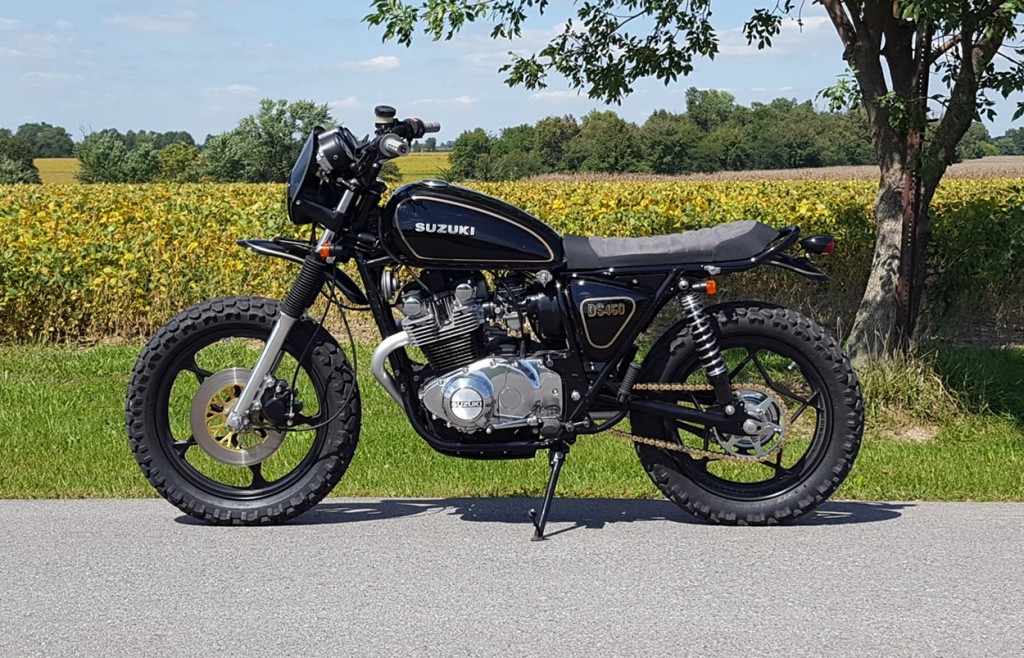 Now that the bike had a repositioned fuel tank and modified frame I moved onto building a new seat pan which kept the straight lines we were after.

Next up was building a clean exhaust system that merges low on the bike and exits through a Cone muffler which I prefer to use. It is all positioned very tight to the bike so your legs never come in contact as well as not interfering with the passengers feet while on the pegs. Clean and simple! Some other fabrication parts include a rock guard below, the fly screen up top, and a high mount front fender because scrambler! The plan was always to keep it simple which we stayed true to as noted by the fact the bike still has factory gauges, forks, tank/paint, and even side covers but made a push near the end to take it to the next level since it was coming together in such a great way.

The engine was completely disassembled for inspection as well as to give a thorough cleaning inside and out as a lot of the gaskets and seals had given up and she leaked oil wherever possible! It was rebuilt after painting the cases, soda blasting the head, and polishing/painting various components throughout. At this point the bike was torn down and the frame, swingarm, and wheels (now an 18” front and 17” rear combo) were sent to powdercoat, the seat pan sent to get upholstered, exhaust sent out for ceramic coating, and tins sent to paint. The fuel tank sports its original paint with only a polish while the side covers and fenders were repainted after new stripes were laid to match the bikes new lines. Notice the subtle details in the logo! As usual I have my seat pans finished out by Rich Phillips Leather as he and his family are great to work with and always deliver. We chose a gripper vinyl for the sides, a gray ultra-suede up top, with a gold stitch holding them together to match the OE stripes. 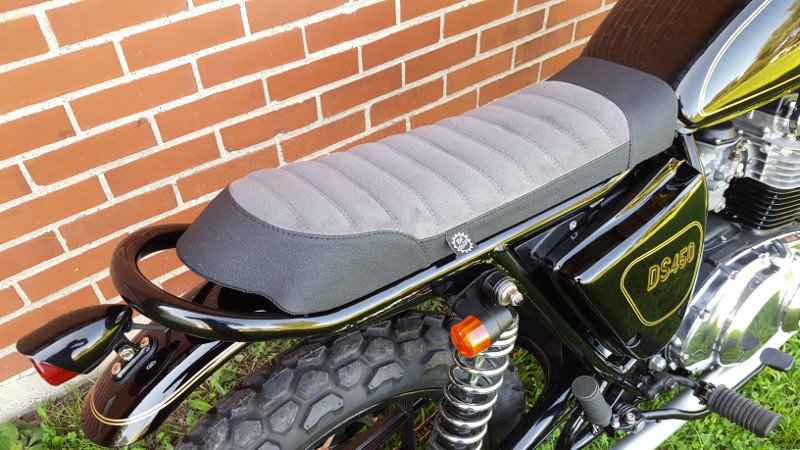 What you see is really on of the cleanest and most usable bikes I have made to date. It is an absolute hoot on and offroad with just the right amount of power and weight for an older dual sport. I would love to make this bike again for myself and ride it everyday! 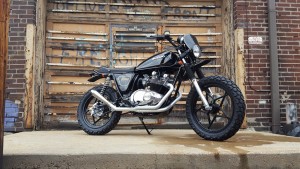 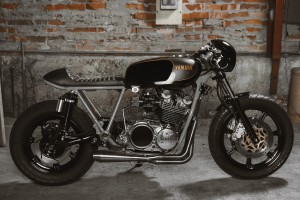 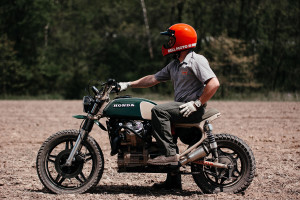