This year, the crew from Hinkley debuted the Triumph Scrambler 1200 XE and XC with a very bold statement:

Unlike many factory-built “scramblers” of today, the big Triumph Scrambler 1200 lives up to the hype, featuring long-travel suspension, ADV-style electronics, plenty of power (89 hp / 81 lb-ft), and it looks simply badass. The XE (“E” for Extreme) is the higher-spec model, adding ABS, lean-sensitive traction control, and a sixth ride mode: “Off-road Pro.” As you might imagine, people were falling over themselves to get their mitts on these bikes as soon as they were imported to US shores. Enter A&J Cycles, a small shop half an hour outside NYC that’s been in business for more than two decades. Founded by Brian Ballard, the shop now specializes in aftermarket Triumph parts. Working with their local Triumph dealer, Locomotion Powersports, they managed to get their hands on the first 2019 Scrambler 1200 XE on the east coast, then spent two months of nights and weekends putting the A&J Cycles twist on the machine:

“We set out with a vision to build a modern version of Steve McQueen’s 1961 Desert Sled. We wanted to build a bike that he would ride today with all modern technology.” The result is the “XEcutioner,” one of the first Scrambler 1200 customs we’ve seen — and what a machine it is. A&J Cycles outfitted the bike with many of their own prototype parts — most of which are or will soon be for sale — and worked with friends such as Dave Adamski (@slagKustom) and Keith Loforte (@beanfab) for custom fabrication and paint. We have zero doubt that the King of Cool himself would love to swing a leg over the saddle and put the XEcutioner through its paces. Below, we get the full details on the build, along with some stunning photography from Mark Squitieri (@Marks_NYC_Moto) and action shots thanks to rider Frankie Peneno (@frankiepeneno). Enjoy! A&J Cycles is a small shop located roughly 30 minutes northwest of NYC owned by Brian Ballard. Our shop is technically part-time as everyone involved still carries full-time jobs however we ship orders and address customer inquiries or needs daily. We have worked on all things with wheels for over 20+ years. We started with turbo-charged Hondas in the late 1990s and early 2000s but have been dedicated to motorcycles exclusively for the last 10 years. After outgrowing Brian’s garage, we opened in our current location in 2017 and have focused our efforts on Triumph Modern Classics and other modern retro motorcycles. Our core business is aftermarket parts for Triumphs so we wanted to be one of the first shops in the country to get our hands on a new Scrambler 1200. We couldn’t wait to put our usual A&J Cycles twist on it, which includes building a clean everyday rider. Luckily, our local dealer, Locomotion Powersports in Mahwah, NJ, worked with us and we were able to take delivery of one of the first Scrambler 1200s on the east coast. Working nights and weekends, we completed the bike in approximately 2 months. Our buddy Dave from Slag Kustom helped us out and we were able to debut the bike at our open house event in June. We have also worked with some of our suppliers on products for the Scrambler 1200 that are now available or will be in the near future. 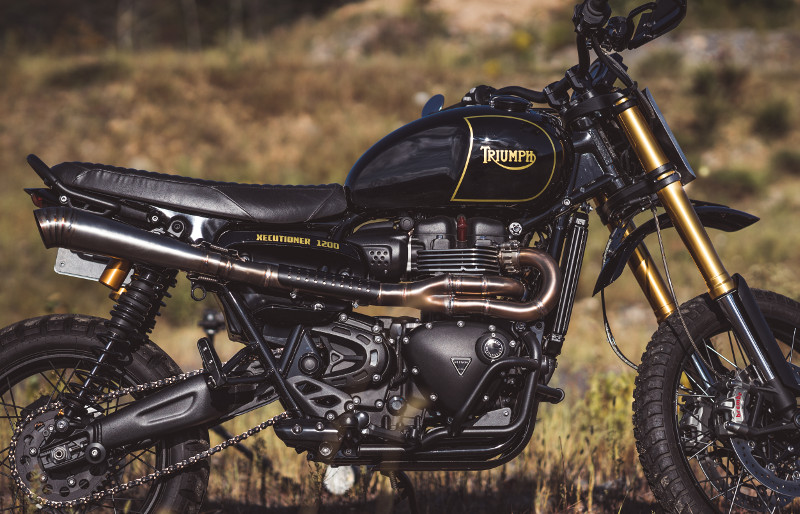 We set out with a vision to build a modern version of Steve McQueen’s 1961 Desert Sled. We wanted to build a bike that he would ride today with all modern technology. A co-worker (Eric) worked with us to design and 3D print a gauge relocation bracket that moved the gauge back close to 2 inches. The end result was awesome. We plan to offer these down the road.