The Harley-Davidson XR750 has been called the “most successful race bike of all time,” winning 29 AMA Grand National Championships across a nearly four decade span of dominance. Just last year, to commemorate this legendary machine’s 50th birthday, the Motor Company commissioned filmmaker Evan Senn of Fast & Left to create XR750: 50 Years of Wins — a film that traces the remarkable history of this machine.

Besides flat track, the XR750 competed in road racing, hillclimbing, and was the preferred stunt bike of Evel Knievel and his most worthy successor, the “King of Harley” Bubba Blackwell:

“Blackwell is actually said to be the only stunt performer to break all of Knievel’s old jumping records on the same motorcycle, the XR750—15 tour buses, 20 cars and 14 semis. (Reportedly, Blackwell has also broken more than 40 bones over his jumping career, which may or may not break Evel’s records there as well.)” –Mecum In 2008, on his 41st birthday, Blackwell broke Evel’s last remaining XR750 record when he jumped 52 stacked cars at Deep South Raceway in Loxley, Alabama — not too far from his hometown of Panama City, Florida. Bubba’s take on the XR750 was characteristically laconic:

“The light weight made for good jumps, he said, while 5 inches of suspension travel made for poor landings.” –Mecum This 1992-titled Harley-Davidson XR750 (production actually ended in ’85) will be hitting the auction block later this month as part of Mecum’s 2021 Las Vegas event. It’s an actual ex-Bubba Blackwell machine painted to red, white, and blue flames to match his stunt suits, complete with gold-flake “Harley’s-R-U.S.” logos on each side of the tank and some hard-earned “No. 1” logos on the number plates.

Of course, the massive blued dual-exhaust down the left side of the bike scream XR750.

The bike was reportedly ridden in some of Bubba’s shows, is being sold with a title, and has been modified with performance brakes so that it can slow as well as it can go. To learn more about this machine or register to bid, check out the Mecum listing. Also, our friends at Silodrome have the scoop on another Ex-Bubba XR750 hitting the block. 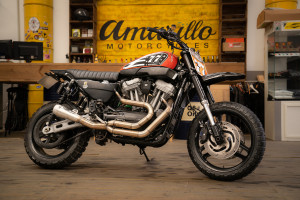 Harleys-R-US: Bubba Blackwell’s Daredevil XR750! - One of stunt legend Bubba Blackwell’s XR750’s hitting the auction block! The Harley-Davidson XR750 has been called the “most successful race bike of all time,” winning 29 AMA Grand National Championships across a nearly four […]