The Yamaha RZ350 was the ultimate, most modern two-stroke street bike sold in the United States.  The liquid-cooled two-stroke, rubber-mounted parallel twin was rated at 52 bhp, and equipped with Yamaha’s YPVS variable-height exhaust port to broaden the powerband.

“Indeed the ’70s hooligan bike had got a new lease on life and almost twice the ponies of its grandad, a power to weight ratio of 2.84kg per hp goes someway to highlighting its legendary giant killing capabilities and the howl from the twin pipes was a common Sunday morning wake-up call.” —Bike Review Unfortunately, the mighty RZ350 proved an evolutionary dead end, as Yamaha soon killed the bike in the US due to emissions headaches. Elsewhere in the world, the bike, better known as the RD350YPVS, earned a cult following, but the end was nigh for high-performance two-stroke sports bikes.

Fortunately, there are those who make it their mission to keep these not only alive, but up to date, and our new friend Bald Anthony is one of them. Anthony has been riding dirt bikes and modifying his street machines since he was a teenager. Over the years, he’s owned a varied array of bikes, including a Honda Express, Honda MB5, several Yamaha R1’s, and this RZ350.

“My garage has grown into my workshop. Customizing bikes to the smallest details has become my passion.” The bike you see here is a 1985 Yamaha RZ350, which Anthony has comprehensively upgraded inside and out:

“I replaced 95% of the bike with new stock and handmade parts. Most of the internal/external engine components have been replaced with new, and almost all of the hardware throughout the bike is CNC polished stainless.” 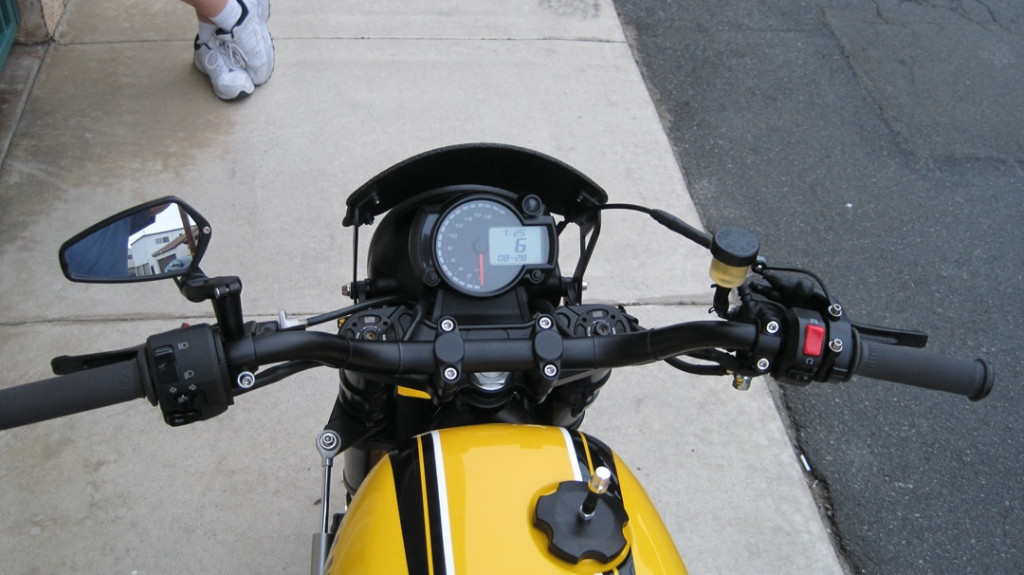 It’s now sporting Yamaha R6 front forks, a custom-made swingarm and linkage, Penske custom-made shock, 17-inch wheels, and much more. Other highlights include a custom harness with R6 controls wired in, along with a GPS speedo and MLock RFID system. 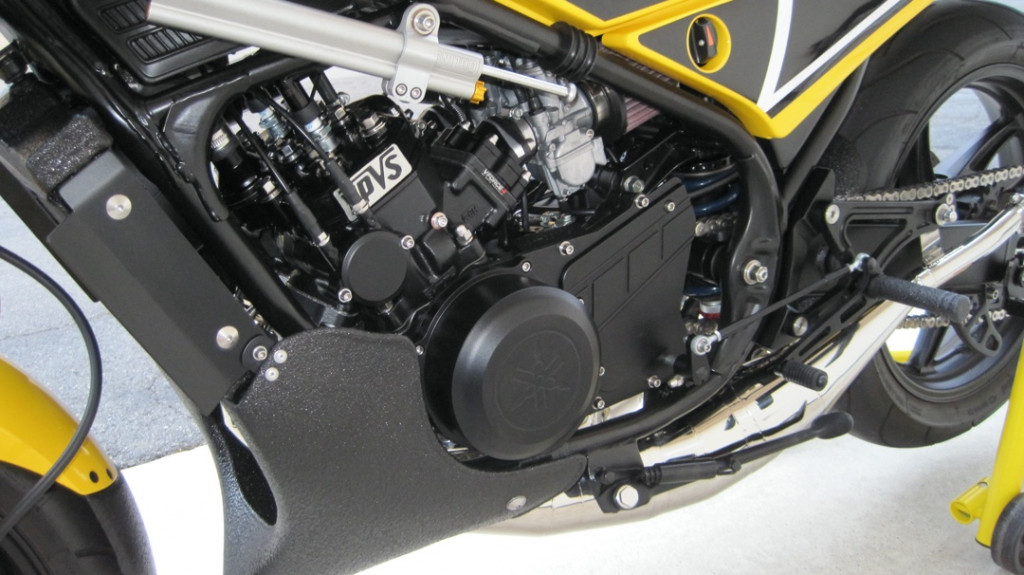 Toomey cans top off the stainless exhaust, and the bike is running a larger aluminum radiator.  Then there’s the paint, sporting the legendary Yamaha yellow and black speed block — all bodywork painted, cleared, and color-sanded inside and out.

The result is the “BA Special” — a two-stroke screamer that looks, rides, sounds, and smells like a dream:

“This bike is a dream to ride from the comfy seat to the sound and smell of the high-revving two-stroke engine. A lot of heads turn when people hear it coming down the street.”

Below, we talk to Anthony for the full details on the build. I’ve been riding dirt bikes since I was 14 years old. My first street ride was a Honda Express moped and I installed a rear shock from a Maico and heavy-duty rims and spokes by Buchanans wheel shop. I’ve owned several street bikes including an MB5, RZ350, 1999, 2002, 2004 Yamaha R1’s. and this last RZ350. I’ve customized every bike I owned one way or another. I also build bikes for clients that need this type of detailed build. My garage has grown into my workshop. Customizing bikes to the smallest details has become my passion. I’m proud of all the details that were incorporated into this build.

The bike started out completely stock. I replaced 95% of the bike with new stock and handmade parts. Most of the internal/external engine components have been replaced with new, and almost all of the hardware throughout the bike is CNC polished stainless. The front suspension is from a Yamaha R6 with updated springs and valving. The rear is running a custommade swingarm, linkage, and a Penske custom-made shock. Rear axle and pivot bolt are both made out of polished stainless. The custom paint scheme has painted and decal graphics and all the body parts are painted, cleared, and color sanded inside and out. 17-inch wheels with a 17/120 on the front and a 17/160 on the rear. The front fender was shortened and extended in the rear. Stainless polished exhaust with custom mounting at the cylinders and at the rear mount with Toomey cans. The wiring harness was custom-made as well. The handmade seat has custom-molded foam and the speedometer is a GPS unit from Koso. The throwback license plate was hand-painted Old School yellow and black. All the cast and other parts were hand-sanded smooth before powder-coating, and I used bedliner material throughout the build. The ignition cylinder was removed and replaced with an MLock RFID system. The aluminum shrouds, protective screen, and cooling fan were added to the larger aluminum radiator. The bike was completely built, then torn down so the frame and all the other parts could be powder-coated and the bodywork could be painted.

Yamaha R6 controls were wired into the system and short CRG levers were installed. A custom mount was made to install the left mirror to the clutch perch. Aluminum spacer blocks were made to space out the rear sets while following the contour of the frame. This bike is a dream to ride from the comfy seat to the sound and smell of the high-revving two-stroke engine. A lot of heads turn when people hear it coming down the street. I wanted to add another custom built bike to the list of others that I’ve completed in the past.

A Note from Roger at Wicked Motorsports

This bike needs to be seen in person to appreciate. The attention to detail is ridiculous. He went as far to make sure the C clips on the rear silencers were match-fitted. He also did a 3M clear bra on the bike that isn’t visible in pics, and so many little things like bolts and fasteners that all are match-fitted. He even has an auto key fob that opens the ignition when you wave your hand over a spot on the bike. It was a pleasure to meet and work with Anthony. There is a list of things a mile long he didn’t mention. Anthony set the bar to paying attention to detail when building an RZ350.