BAAK develops an adventure kit for the Scrambler 1200…

The Triumph Scrambler 1200 XC / XE may be our favorite production bike currently available, an 89-bhp brute with premium long-travel suspension and plenty of charisma. The bike harks back to the Triumph desert sleds and scramblers of the 1960s — the grandfathers of today’s dual-sport and adventure bikes.

Where the bike really stands out is the off-road performance. Unlike many of the production scramblers on the market, the Scrambler 1200 is more than just a “neo retro” styling exercise:

“Some motorcycles may be art, but this one is built to be ridden hard. Any sense of worry about its appearance is quickly replaced with pure, unfiltered joy once you start hooning around on the XE. With nearly 10 inches of travel and a premium, fully adjustable Showa fork paired with Öhlins dual shocks, the suspension is nothing short of amazing.” —Rider That said, the Scrambler 1200 is far from a true Adventure bike. After all, it lacks a windscreen, luggage, crash protection, or a long-range tank. Recently, our friends at BAAK sought to take the Scrambler farther into ADV territory:

“Our team saw the opportunity to take the 1200 Scrambler where it was not meant to go and develop its potential as a hybrid Scrambler / Adventure bike, creating something Triumph doesn’t have in its catalog.” The idea was not to create a true Adventure bike — there are plenty of those already on the market — but to “tick a few of the boxes” that define the category. Says BAAK:

“With this in mind, the R&D team worked to solve some of the flaws of the Scrambler: lack of wind protection, average range, lack of high end luggage.” 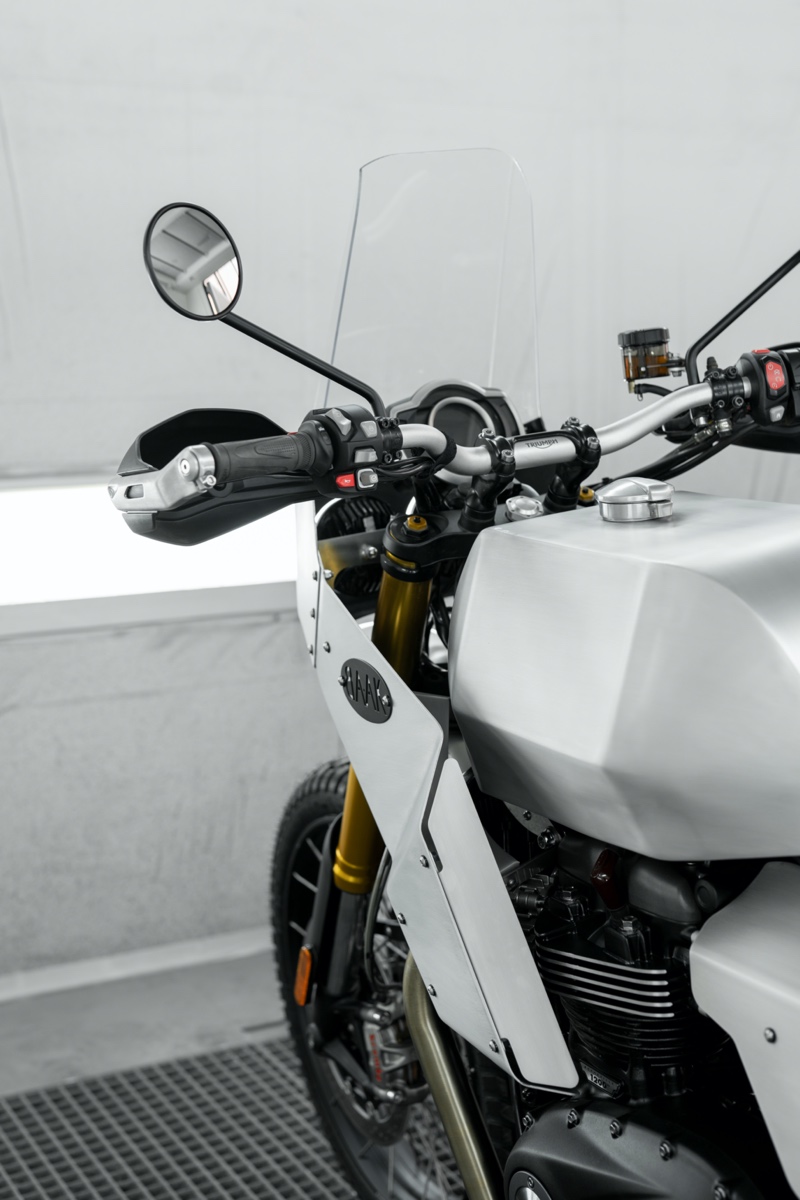 The BAAK 1200 “Aventures” (French for Adventures) now boasts aluminum bodywork with stainless brackets that require no welding or permanent frame modifications, a polycarbonate Margard® windshield, and a pair of dual LED lights that pay homage to the Paris Dakar rally bikes of the 1980s. Despite the 2.6 gallons of added fuel capacity, BAAK says the lightweight de-catted and aluminum bodywork translate to a marginal weight change.

In sum, BAAK has created a kit for Scrambler 1200 owners to transform their machines into lightweight Adventure bikes with wind protection, longer range, and hard luggage — and in a very neat aesthetic package, sure to turn heads everywhere. Best of all, all of the changes are completely reversible, using OEM mounting points!

Below, we get the full story on the BAAK 1200 Adventure straight from their team. True heir of the original Scrambler philosophy, the Triumph Scrambler 1200 has been a success for the British brand thanks to its class leading capabilities. But, as well built as it is, the bike remains fairly naked and leaves the rider exposed to the elements while riding, making it less practical for longer rides and adventures. Through their latest development projects, the BAAK workshops succeeded in enhancing the potential of this Scrambler by borrowing some of the main traits of the Adventure bikes without slashing its excellent dynamic capabilities. Usually forgotten by most of the motorcycle builders who favor the minimalism of the true cafe racer style, the rider’s ergonomics and well-being was at the heart of this project. When the main direction of the build brief is a radical design approach, the end result will have to sacrifice some of the functionality or comfort for the beauty of the object.

And yet, placing the actual use of the product is one of the basic pillars of any design endeavor. Without consideration for its potential of interaction, an object, as beautiful as it is, cannot truly be considered fully achieved. And when talking about motorcycles, some ergonomic considerations are deeply linked to the potential usages of said bike as well as the true riding experience.

“A BAAK bike is not meant to stay in an office or a living room. We design each bike like an extension of its owner. Every bike coming out of our shops in Lyon and Los Angeles is unique, exclusive, sometimes polarizing but never without thinking about its functionality.” – Rémi Reguin, BAAK Founder BAAK has long understood this and placed the ergonomics at the center of their projects for the past several years. While developing BAAK Adventure, their motorcycle trip / experience division, the team became dedicated to improving the ergonomic potential of their builds, emphasizing characteristics like protection, range and cargo carrying capabilities. The first results could be seen on projects like the Himalayan 400 or the 650 Interceptor Trail, and are now a clear direction in which BAAK is going. This 1200 Adventure required more than 18 months of work from the first sketches to the extensive test sessions of the various versions on and off road. Since its launch in 2019, the Triumph 1200 Scrambler has been one of the main players
in the Neo Retro segment. With a storytelling largely anchored on Steve McQueen’s exploits and the iconic jump from The Great Escape classic movie, the engineers of the Hinckley-based brand have succeeded in developing a bike exceptionally effective thanks to their fantastic engine and a very capable suspension setup. But, as impressive as it can be, this bike is nowhere near the potential of the modern Adventure bikes, as the core philosophy of this segment is miles away from what the Scrambler was made for. And that’s exactly where our team saw the opportunity to take the 1200 Scrambler where it was not meant to go and develop its potential as a hybrid Scrambler / Adventure bike, creating something Triumph doesn’t have in its catalog. The idea here was not to make it a true Adventure bike, but at least to tick some of the basic boxes that define that segment. With this in mind, the R&D team worked to solve some of the flaws of the Scrambler: lack of wind protection, average range, lack of high end luggage. Part of the brief was (as it is most of the time the case with BAAK) the use of high-end materials such as aluminum and simple design. Therefore a very clean and linear design was chosen.

“Beyond the functionality, our clients do not want a bike they will see at every corner. They want exclusivity, a personalized bike even it means being disruptive to fully assert themselves.” –Frederic, Associate General Manager

One of the main considerations when starting this project was to add wind protection and reinforce the personality of the front of the bike. This aluminum fairing (and the side covers as extensions) required the creation of a stainless steel bracket system. As an additional challenge, these brackets should be fitted on the bike without permanent modification or welding of any sort, so it uses mounting points already present on the bike. This ensemble required multiple iterations and intensive testing sessions to ensure the quality of the final product. As an homage to the iconic adventure bikes of the 80’s and 90’s, this BAAK 1200 Adventures features a pair of round headlights (of course with the latest LED technology to maximize the light output) and a generous polycarbonate Margard® windshield. With a modest 120 miles range from the factory, the range of this scrambler has been extended to just over 180 miles thanks to a new brushed aluminum gas tank. Once again the installation of this 6.6 gallon tank does not require any modification as it simply fits on the factory mounting points. Even though it’s one of the most identifiable design elements of the Scrambler 1200, the high exhaust line on the right side of the bike was replaced by a low exhaust line running on each side of the bike. This choice was motivated by the need for integration of the fairing, as well as the potential to slightly lower the mass and center of gravity. It also allowed the installation of 18L aluminum cases (the system will later be completed by a matching top box) in a more compact way without worrying about leaving room for a high exhaust.
The choice of Aluminum as main material for this line of parts (fairing, side covers and luggage) and the decatted exhaust system allow for a marginal weight change despite adding 2.6 gallons to the fuel capacity, while keeping the exceptional capacities of the Scrambler. The version presented here also features a suede seat (in a high version) and LED turn signals. The BAAK 1200 Adventures is already available as a complete project or the parts can be
found as kits on BAAK website.