In 1956, Triumph launched the TR6 Trophy, a lean and mean street-legal scrambler developed with an eye toward a US market hot for desert racers. The 42-hp 650cc parallel-twin featured Triumph’s new aluminum alloy “Delta Head,” as well as several details that appealed to weekend racers:

“The hot new TR6 not only came sans nacelle, it had slim alloy fenders & even a removable headlight, with quick-detach wire connectors. It could literally be ridden to the races, raced, then ridden home.”  —WBW The TR6 quickly earned the nickname “Trophy-Bird,” as many saw it as a cross between the off-road Trophy 500 and the 650cc Thunderbird. All in all, it’s one of our favorite British bikes of all time, and a perfect platform for scrambler and desert sled builds. One of our favorite builders of new and vintage scramblers is Kengo Kimura of Hiroshima’s Heiwa Motorcycle, whose recent Suzuki 250 Grass Tracker scramblers have been fan favorites here on BikeBound. Now we’re proud to showcase this 1956 Triumph TR6, built for a client who owns a Harley and needed something for off-road duties. Kengo says he’s particularly proud of the blend of vintage and aftermarket parts, as well as the larger tank he produced to allow for longer rides. As you can see in the photos, this TR6 scrambler may look incredible, but it’s no show pony — it’s a bike meant to be taken out for adventures on the trails.

Special thanks goes out to our friend Kazuo “Kaz” Matsumoto (@steeldog_photo) for the gorgeous photos. Below, we talk to Mr. Kimura for a few more details on the build. • What is the make, model and year of your bike? • Why was this bike made?

The owner owns a Harley, so I bought this Triumph as an addition because it can’t run off-road. • What was the design concept and what inspired the build?

It was important to be able to run long distances, so we made the tank larger. • What custom work has been done on the bike?

• Do you have a nickname for your bike? • Please tell us about the comfort of the ride.

Torque makes it easy to ride. • Is there anything you’re particularly proud of during this build?

Combining vintage parts and production parts such as mufflers. 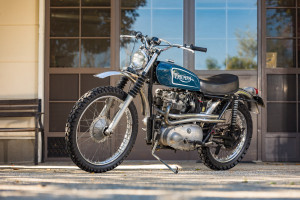 Grass Tracker No. 008: Suzuki 250 Scrambler - Heiwa Motorcycle builds an vinduro-style 250 scrambler…  Last year, we featured a Suzuki TU250 scrambler from one of our favorite builders, Kengo Kimura of Heiwa Motorcycle, who built the vintage-style, dual-sporting machine for himself: “His […] Grass Tracker 004: Suzuki TU250 Scrambler by Heiwa - One of the world’s most renowned customizers builds himself a scrambler… The Suzuki TU250, better known as the Grasstracker or Volty in some markets, is a lightweight single-cylinder street bike introduced in 1994 — a […]