Here at BikeBound, we’re big fans of two-strokes — the sound, smell, and sometimes scary power bands of these two-wheeled smokers just move our blood. 2022 was a particularly strong year for two-strokes on BikeBound, so we decided to follow up our Best Customs of 2022 with a 2T-only list.

As with our previous Top 10 lists, your visits, likes, and engagement served as votes, so these bikes were selected according to their popularity among our readership. This is the most objective ranking we could achieve.

Without further ado, here’s our list of the Top 10 Two-Strokes of 2022, in alphabetical order by builder:

Our feature of Stéphane Peterhansel’s Yamaha “YZ535” Supermoto hit it big, but considering that Team Sonauto Yamaha actually built the bike 33 years ago — in 1989 — we didn’t think it was fair to stack it up against these contemporary builds. Still, it deserves a honorable mention as one of our most popular two-strokes of 2022! Scary Fun: Yamaha RD400 Café Racer - Two-Stroke Smoker from Hawai’i’s Speedychoppy Builds…  In 1976, the Yamaha RD400 appeared as the successor to the RD350, which had become a legend in its own time. Instead of simply overboring the 350, Yamaha created […] Top 10 Two Strokes of 2022! - Here at BikeBound, we’re big fans of two-strokes — the sound, smell, and sometimes scary power bands of these two-wheeled smokers just move our blood. 2022 was a particularly strong year for two-strokes on BikeBound, […] Ripsnorting Restomod: Suzuki RG500 Gamma - “The Dragon on an RG500 is the closest you can get heaven…” Introduced in 1985, the Suzuki RG500 Gamma was one of the most faithful two-stroke street-legal replica racers ever produced.  It was derived directly […] 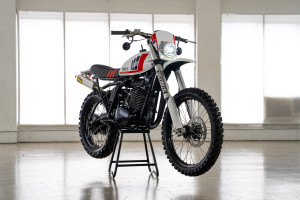 Honda NSR500: Street-Legal 500cc GP Bike! - Like Shaving with a Chainsaw: David Howard Racing builds a 500cc Grand Prix bike…for the road.  In the modern era of Grand Prix motorcycle racing, nothing can compare to the dominance of the Honda NSR500, […] The Cosmic Rider: Yamaha RD350 YPVS - For Sale: Blechmann’s Two-Stroke Stunner!  Bernhard “Blechmann” Naumann is one of Europe’s most highly regarded builders, known especially for his metal-shaping skills. Hence his nickname, “Blechmann” — The Tin Man.  Bernhard grew up in a […] Yellow Hornet: Yamaha RZ350 Hybrid / Restomod - For Sale: 1983 Hybrid RZ350… The Yamaha RZ350 was one of the last, most advanced two-stroke street bikes of all time, incorporating decades of two-stroke research and development. Known as the RD350 YPVS in the […] Two-Stroke Gold: Yamaha RD350 Café Racer - For Sale: “Goldhead” RD350 by Twin Line Motorcycles… The Yamaha RD350 remains one of the sweetest, most well-balanced two-strokes of the 1970s — and one of motorcycling’s great giant-killers, both on the track and the […] 427 Tracker: Yamaha RD400 Street Tracker - Smyth Innovations builds a 427cc two-stroke street tracker…  In 1976, Yamaha released the next evolution of the two-stroke RD series: the Yamaha RD400. Contrary to popular belief, it was much more than a punched-out RD350: […] Green Poison: Kawasaki Ninja 150 Two-Stroke Tracker - A Two-Stroke Street Tracker from House of Customland…  Did you know that Kawasaki, for years, produced a small, two-stroke version of the Ninja for the Asian market? It’s true. In 1996, they launched the Ninja […]