Here at BikeBound, it’s no secret that we’re big fans of street trackers, flat trackers, and supermotos. And we aren’t alone — so are you, our readers. One of our Top 10 Customs of 2022 was Badass Factory’s “Baby V-Max” Yamaha FZX750 street tracker, and several of our Top 10 Two Strokes were trackers.  Flat track inspired builds continue to be some of the most popular builds on BikeBound.

So we decided to follow up with a list of the most popular trackers and supermotards we featured last year, based on traffic and social shares. Just for clarification, this is an objective list based on the statistics we compiled. Stay tuned for our Editor’s Choice list coming soon!

Without further ado, here are the BikeBound Top 10 Trackers and Supermotos of 2022, presented in alphabetical order by builder. 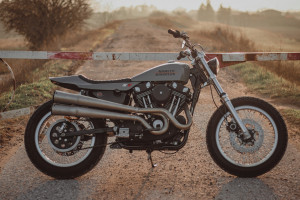 Top 10 Trackers and Supermotos of 2022 - Here at BikeBound, it’s no secret that we’re big fans of street trackers, flat trackers, and supermotos. And we aren’t alone — so are you, our readers. One of our Top 10 Customs of 2022 […] Huskypower: Husqvarna 630 Street Tracker - Satset Garage turns back the clock on a modern sumo…  Introduced in 2011, the Husqvarna 630 SMR was one beast of a supermoto — a fuel-injected big-bore street version of the bikes that had won […] The Final Exam: Aeon 150 Street Tracker - A young mechanic’s final test to work at KenKen Moto!  Aeon Motor is a Taiwanese company that began manufacturing motorcycle parts in 1970 and started building their own ATVs, scooters, and mini-bikes for European and […] La Distinguida: Kawasaki KZ440 Custom - Motorockers Garage’s Ribbon-Winning KZ…  The Kawasaki KZ440 was a middleweight parallel-twin that evolved from the KZ400, proving itself a competent runabout with a solid blend of performance and economy. One owner who’s used his KZ […]