While a Harley-Davidson may not sound like the most ideal platform for a cafe racer, these American V-twins make surprisingly solid cafe bikes — both in style and performance. The Sportster is the popular candidate for a conversion, as it has long been the lightest and most agile platform in the Harley stable. We are now starting to see newer liquid-cooled Street 750 cafe racers, as well as builds based on the smaller sibling, the Street 500. FXR and Dyna builds are less common. Black Owl: Sportster 883R by Hidemo - Hide Motorcycle builds a KR-inspired street and circuit Sportster… Introduced in 1953, the Harley-Davidson KR would come to dominate motorcycle racing in the United States. A year earlier, Harley had introduced the Model K, a […] “Indie” Harley XG750 Custom by Milwaukee Moto - “I decided to put the XG on a diet and make it as cool as possible…” In 2014, Harley-Davidson introduced their first new lightweight motorcycles in 40 years, the Street series. The Street 750, also […] 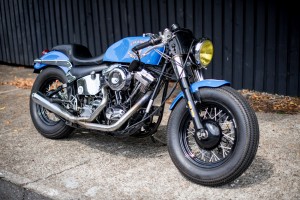 Softail Cafe Racer: Harley-Davidson “Gnews” by Mr Martini - The Harley-Davidson Fat Boy is a softail best known for its solid-cast wheels and massive presence. The Evolution version, built from 1990-1998, featured an 82 cubic-inch (1340cc) V-twin and quickly earned a firm place in […] 883 Sportster Cafe Racer by Get Lowered Cycles - Today we’re proud to showcase one of the prettiest Sportsters we’ve ever come across, and the story of the build is even better. This is the personal bike of Meg, who is the co-owner of […] Harley XR1200 Cafe Racer by Shaw Speed & Custom - Shaw Speed & Custom continues to turn out amazing Harley customs, well over 100 to date. The ones that light our fire are the kick ass Sportster builds, like the CRXR. Shaw Harley-Davidson has been […] One Mean Harley XL1200S Cafe Racer - Here we have one very cool XL1200 cafe racer by @crowsbike. How bout those pipes! And blue frame!  We’ve asked the owner if we can run a feature on this bike. We’ll keep you posted! […] Pushing Iron: 883 Sportster Cafe Racer - Chris Owens is an Air Traffic Controller by trade, and with a job that stressful, you need to have some good ways to relax.  Chris has always enjoyed woodworking, but this was his first foray […]