The original Triumph Bonneville and its predecessors were some of the most popular scramblers and desert sleds in the California desert racing heyday, ridden and raced by the likes of Steve McQueen, Bud Ekins, and many On Any Sunday luminaries. The motor was also a popular choice to power purpose-built race frames like the Rickman Metisse.

In 2001, the third-generation Triumph Bonneville was introduced, produced in the Hinckley factory. Available as a carbureted model for several years before the switch to fuel-injection, these modern parallel-twin machines continue to serve as a popular donors for scrambler builds.

Below you’ll find some of the Bonneville Scramblers we’ve featured here on BikeBound. 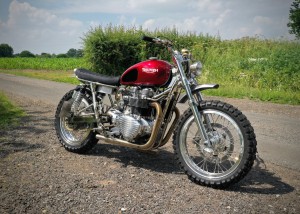 White Helmets Tribute: Triumph Bonneville T100 “No.2” - White Helmets veteran Oli Blount builds one stunning tribute machine… For nearly a century, the Royal Signals Motorcycle Display Team — better known as the White Helmets — was a team of soldiers from the […] McQueen Machine: Triumph 865 by Absolut Motorcraft - Built for exploring the hidden paths, coves, and beaches of Ibiza… In the climactic scene of 1963’s WWII epic, The Great Escape, USAAF Virgil Hilts, played by none other than Steve McQueen, guns his stolen […] Triumph Bonneville Scrambler by Gasoline Motor Co. -   The Triumph Bonneville has quickly become a steed of choice for the modern retro crowd — a bike that manages to capture the classic, two-wheeled British style in a contemporary form.  The bike is […]