Today, we’re thrilled to feature this stunning Yamaha RD350 by 24 year old Jake Drummond of Oshkosh, Wisconsin. Oshkosh is the home of one of the largest airshows/fly-ins in the world — EAA AirVenture Oskhosh — and one of the nation’s aviation capitals. So we weren’t surprised to learn that Jake built this two-stroke flyer in a corner of his father’s hangar. Jake races on the dirt and ice, and he’s been building custom bikes since he was 18. He spent two years on this custom RD, using the build as a way to test his skills and push his limits. He could not even weld when he started the project, but he continued pushing himself to learn, doing every last bit of work himself:

“As the aluminum welds on my tank got better and better, new ideas became possible. I became pretty fearless of the shit I didn’t know and that’s kind of a cool feeling.” He was inspired by boardtrackers and dirt jump mountain bikes — echoes of each you can see in the design. We could not be more proud of this young man. Below, we get the full story from Jake himself, as well as some incredible photography by Kerry “Danger” Fores. My name is Jake Drummond, I’m 24 years old, and I’m from Oshkosh, WI. I started riding dirt bikes when I was 6 and since then my addiction has just gotten worse. I still ride moto and race on the ice in the winter, but my biggest passion now is building handmade motorcycles. I finished my first bike when I was 18. It was XS650 Street Tracker. It was a great bike as most XS’s are, but I knew I could do more. I am currently working out of my dad’s hangar. He is a pilot and also rebuilds crashed airplanes in his free time. He has been very supportive of my projects and lets me use a corner of his shop even though I make huge messes and get in his way.

This was a personal project to test my own skills. This is a question I think about a lot and I think its a combination of a lot of things. About a year before I even started this bike I had drawings of it. I fell in love with the simplicity of the RD and thought it would make a great bike to pound the piss out of. I also love the look of board trackers and 2 wheeled things with big wheels. When I step back and look at it, it also reminds me of a dirt jump mountain bike and I love the look of those as well. In the beginning, I planned to build something ratty but tough and unique looking. I think this was mostly because I didn’t have much confidence in my ability to build something that looked nice. I couldn’t even weld when I started this project so every task was a huge obstacle and it forced me to learn new skills. As I started to get the basic shapes of the bike together, I became more and more obsessed with the quality of my work. As the aluminum welds on my tank got better and better, new ideas became possible. I became pretty fearless of the shit I didn’t know and that’s kind of a cool feeling. Another thing I wanted to make sure of was that I did all of the work myself. This bike didn’t have any kind of tight time frame so I wanted it to be a representation of my skills and what i could do, so I did everything from the metal work to the paint and upholstery. That may be why it took 2 years!

The only stock part of the frame that remains is the perimeter around the engine. I cut out and re-gusseted the steering head in order to fit a 4 cell ballistic battery. I was also able to hide all of the other electronics under the tank. I also rebuilt the subframe to accommodate the dual shock setup and stubby seat. The swingarm was also heavily modified. I had to re-gussett it to fit the big pizza cutter 21 in the rear and also made shock mounts. 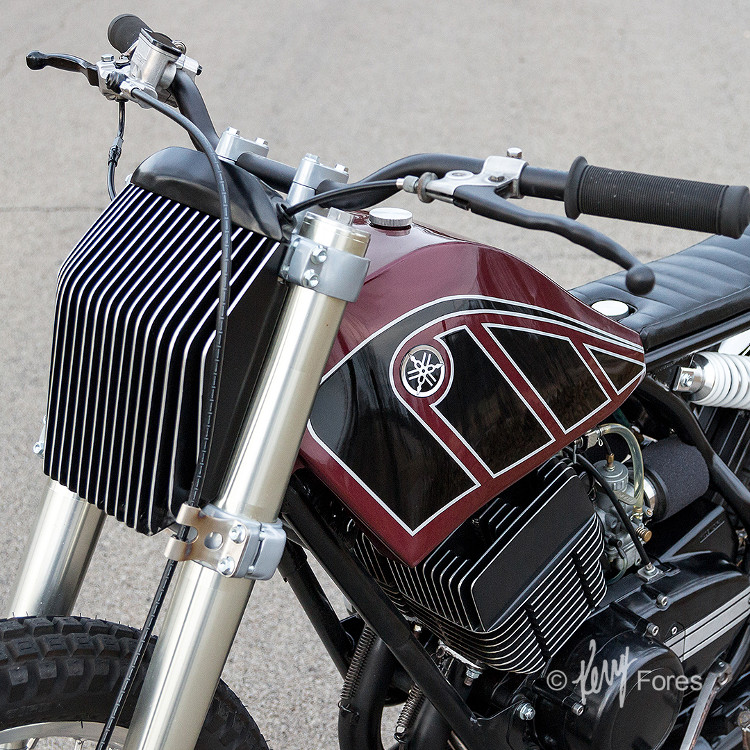 There are parts throughout the bike that are meant to emulate the cylinder head cooling fins. Most obvious is the headlight grill but the rear fender and boost bottle on the carbs also have the same look. Aluminum fork and disk guard for that moto look. The pipes were originally DG’s that I cut apart in order to get them to fit nicer. I also added a stinger with a more traditional 2 stroke silencer setup. That was a weakness of the DG’s. They rely on the silencer to act as a stinger. I also made the aluminum silencers. The tank and seat bump were both made out of aluminum. I sewed the pleated seat. First cover I ever did. The most unique parts on the bike are probably the throttle and kickstand. Both are made of stainless and I’ve never really seen anything like them before. They are both a product of being insanely bored sitting in engineering classes at school. I’m an awful student. lol 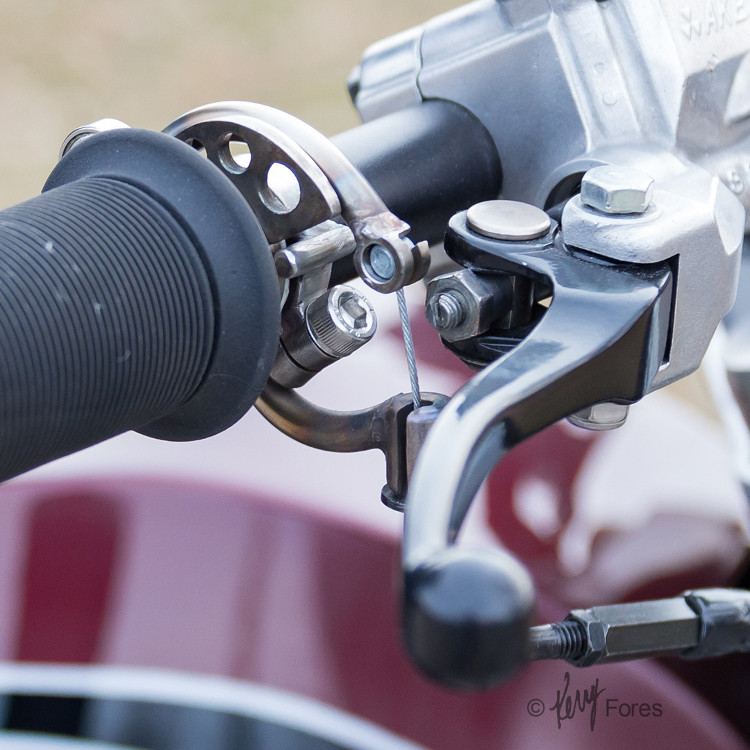 I also painted the bike. It’s inspired by the old Yamaha moly stripes. Just put a little twist on it in order to make it fit the shape of the tank.

No idea! The fighting board scrambler? lolzz I’m mostly proud of how everything came together and the skills I gained. If I had to choose specific parts, I would have to say the throttle and kickstand. I really enjoyed the challenge of making those things work in unique ways. They are parts that often get overlooked but I really like watching people twist the throttle and say WTF!