While the Yamaha SR250 may not seem like the most likely candidate for customization, the little air-cooled mono-cylinder commuter machine has become a favorite among custom bike builders. While the first-generation bike was only available for a few years in the USA, the Euro models remain plentiful, affordable, hard-to-kill machines.

Enter Gianpaolo (GP) of Milan’s Meccanica Serrao d’Aquino, whose Yamaha WR400 tracker we previously featured. From the time GP was 15, he has kept his hands dirty working on bikes:

“I started my experience in Ducati and Kawasaki dealership in Reggio Calabria. A few years later, I moved to Perugia and worked for a Suzuki dealer. In 2009 I moved to Milano and worked for Collezione Motociclistica Milanese restorations and more. In 2013 I opened my own workshop, Via Gardone 22 Milano.” The Yamaha SR250 you see here is a 1998 model, built for one of GP’s customers, a “lady biker.” The result is a lightweight, stylish runabout sure to turn heads in Italy and beyond. We especially love GP’s red and silver take on the iconic Yamaha Speed Block paint scheme and the functional yet minimal mudguards. Below, we get the full story on the build. Personal project to sell to a customer…a lady biker. I love the “SR” essentiality, the “mono” and the lightness. Electric start and vintage lines all right for the lady. It’s a middle way between a street tracker and a scrambler. 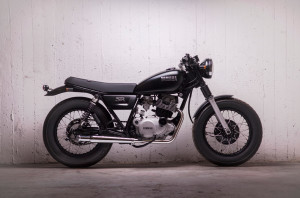