What you really want under the tree this year…

In the last decade or so, we’ve seen a real resurgence in minibikes — a 21st-century rebirth of a trend that swept the nation in the 1960s-70s, when it seemed like every household had a Trail 70 or pull-start “boonie bike” in the shed or garage. The Honda Grom and Kawasaki Z125 have created communities all their own, and last year a brand-new Honda Monkey was introduced — a throwback to the original, which stole the hearts of a whole generation of riders. What’s more, engine manufacturers like Lifan and Predator have it easy to upgrade vintage minis with high-performance crate engines, and companies like Sunday Motors and Ohvale are producing race-ready flat track and road racing minis, powered by such engines. Just last month, we took our own ’85 Honda XR100 mini motard on the track at the Herrin Compound for the first time, where mini racing is a regular occurrence. There you’ll see stars of today and tomorrow lapping side-by-side, pros like Josh Herrin and Ashton Yates trading positions with lightning-fast youngsters like Ercel Abbot Jr. and Julian Alessandro Correa. Leave it to our friends Max and Erica Droog of Droog Moto to create some of the baddest minis on the market. Over the years since we’ve known them, the husband/wife duo has developed a signature style with their builds, creating bikes that would be perfectly matched for another Mad Max or Blade Runner remake — post-industrial desert sleds and streetfighters with angular lines, matte and weathered finishes, and high-performance engines, both ICE and electric. Now they’ve turned their attention to the small-displacement sector, developing a series known as the “DM-018 Mini Fighters.” Says Max:

“Mini bikes…everyone loves them and there is no denying it! So we set out to build the toughest mini bikes out there.” Like all of the machines from Droog Moto’s built-to-order platform, each Mini Fighter is built to the client’s specific specs, available with a 125-190cc engine, and the suspension is dialed in for the rider’s weight and riding style/terrain. The bikes have two-gallon fuel cells, enough for some serious range out of these small engines, along with 12-inch wheels and LED lighting. All in all, these look like a handful of fun, and are sure to attract photos and conversations wherever they’re parked. Below, we get a few more details from Max and Eric themselves.

Mini bikes…everyone loves them and there is no denying it! So we set out to build the toughest mini bikes out there. These are DM-018 Mini Fighters. A smaller option in our built to order platform. Still being built to client’s specs, you have the option of a 125-190cc platform. DM-018 is the perfect machine for any mission and small enough to strap to the back of your Rezvani Tank and hit the road. 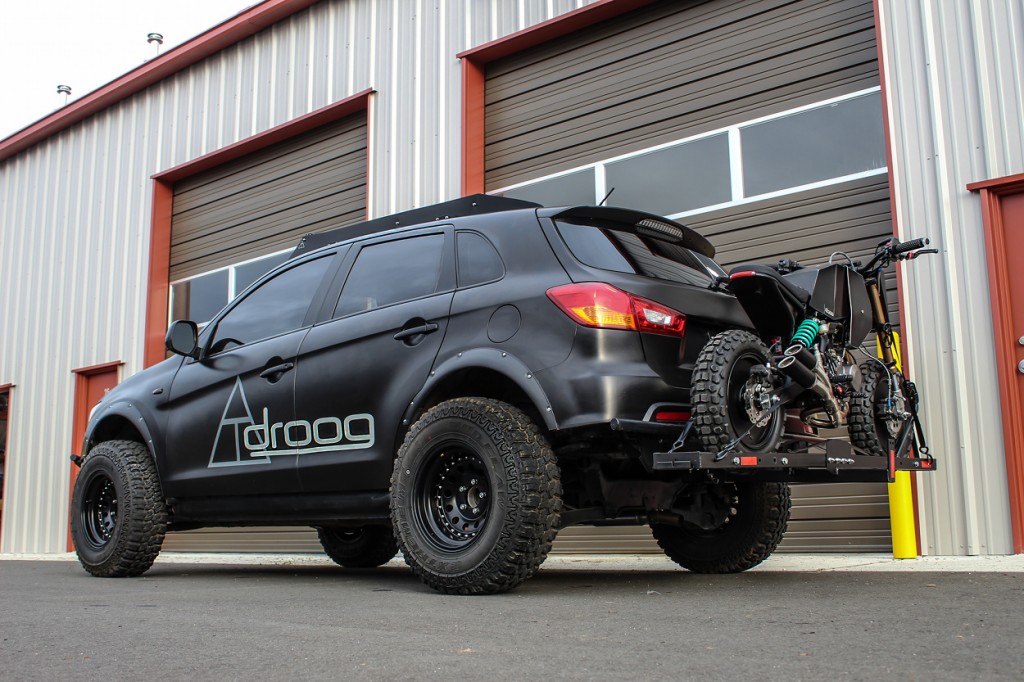 The 12” wheels are no problem for city brawling and a bit of trail smashing if that is your thing too! We dial in the suspension to the client’s specs giving them a comfortable ride. Each Mini Fighter is setup with a new intake and exhaust system and tuned with a fuel controller providing you with the best performance. Just like its bigger siblings, the Mini Fighter comes with bright LED lighting and the ability to take you just about anywhere. The 2-gallon fuel cell keeps your range high for when you’re ready to hit the streets. The tank is clothed in an aluminum cover and a 3d-printed vent. It’s our belief that everyone should have a Mini Fighter in their arsenal!