The Honda XL series was a range of four-stroke enduro/dual-sport motorcycles. In 1979, the first XR model was produced, and the XR remained the purpose-built, dirt-only competition range as opposed to the street-legal XL series.

Probably the most popular model for custom scrambler builds is the XL600R, a big-bore dual-sport produced in the 1980s. Later, the XL series was discontinued — or rather, merged with the XR range, and the street-legal machines were given the “L” suffix.

Below are some of the XL-based scramblers we’ve featured here on BikeBound.com. The Fat Lady Sings: Honda Varadero 1000 Scrambler - Introduced in 2001, the Honda XL1000V Varadero was an interesting machine. Honda took the 996cc 97-bhp V-twin from their VTR 1000 Firestorm / SuperHawk and put it in an adventure-touring chassis. The result was a […] Prairie Dog: Honda XL600 Desert Sled - Marmisto’s take on the classic Desert Sled – the Prairie Dog There are custom bikes with build sheets that read like expensive shopping lists, outfitting the machine in a dizzying array of high-spec bling, and […] Vulture Moto’s Vintage 500 Series - A pair of 500 thumpers from Germany’s Vulture Moto! The 500cc “big single” remains one of the best, most versatile all-around engine configurations in motorcycling history, from the British 500 singles of yesteryear to the […] Honda XL600LM “Bulldog” by GPgarage Moto - The Honda XL600LM was a tribute to the HRC Paris-Dakar Rally machines of the 1980s. In 1982, Cyril Neveu won the legendary trans-Saharan race on an XR550, and Honda was intent on repeating that victory, […] 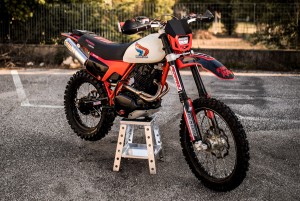 Baja Commander: Honda XL500R Baja - GPgarage Moto builds a Baja restomod! The XL500R was Honda’s 500cc dual-sport in the early 1980s, a mono-shock (Pro-Link) evolution of the twin-shock XL500S, featuring a 32-hp SOHC engine with counterbalancers, long-travel suspension, and a […] Big Bore Restomod: Honda XL600R by Motorieep - In 1983, Honda introduced the XL600R (aka 600 XLR), a big-bore dual-purpose machine with nearly 11 inches of ground clearance, 8+ inches of suspension travel, and 45 horsepower on tap. Like other open-class dual-sports of […]

Rubicon XL: Honda XL250 by One Down Four Up - The Rubicon Trail is one of the most legendary 4×4/off-road trails in the world, a 22-mile route through the Sierra Nevada mountains just west of the California/Nevada border. Native peoples originally used the route to […] The Bullfighter: Honda XL200 Tracker by Matador Motor Co. - Built to rip through Istanbul traffic and escape to the woods… The Honda XL200 is a modern incarnation of the legendary XL/XR series, a 20-hp air-cooled dual-sport with modern upgrades such as electric start and […] “Civetta” Honda XL600 Scrambler by Padova Dirt Custom - “Dirtstyle” Honda XL from Italy… The Honda XL600 is one of our favorite dual-sport bikes of the 1980s. The air-cooled RFVC radial valve engine offered 45 horsepower — solid punch at the time — and […]