A sportbike (or sport bike) is any modern motorcycle designed and optimized for cornering, accelerating, and braking on paved roads or tracks. As Kevin Cameron of Cycle World states:

“A sportbike is a motorcycle whose enjoyment consists mainly from its ability to perform on all types of paved highway – its cornering ability, its handling, its thrilling acceleration and braking power, even (dare I say it?) its speed.”

In modern days, the sportbike cafe racer has become more common, as these bikes handle and perform exponentially better than their vintage predecessors, but modern sportbike styling leaves much to be desired for the rider or builder who is a fan of retro or classical aesthetics. Super Sport Tribute: Ducati 848 Café Racer - Jerem Motorcycles builds a modern tribute to the Ducati SS…  Introduced in 2007, the Ducati 848 has been called a superbike-killer, a 122-bhp V-twin sportbike with razor handling, an uproarious soundtrack, and a top speed […] The Langen: A Modern Street-Legal Two-Stroke Sports Bike! - The Langen Two Stroke: 250cc, 265 pounds, 76 bhp…  Here at BikeBound, we have a soft spot for two-stroke street bikes. There’s just something about the size, scent, and sensations of a two-stroke that call […] Handbuilt Show 2022: Café Racers! - Cafe Racers, Real Racers, and Superbikes…  The Handbuilt Show in one of the best motorcycle shows on the planet, celebrating hand-built machinery in a world that seems to be hurtling toward the virtual, digital, and […] Neo Café Racer: Honda CBR500R “Yoru” - “Life is too short to ride something ordinary.” In 1988, the Japanese anime film Akira hit theaters — it was destined to become a modern cult classic, widely regarded as one of the greatest sci-fi / […] 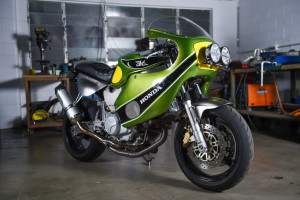 Farewell VTR: Honda VTR1000 by Francis Von Tuto - For Sale: 1000cc V-Twin “FTVR” from Francis Von Tuto… In the 1990s, Carl Fogarty had been putting the hammer down on the Japanese fours in World Superbike, piloting his booming Ducati to four championships. Riders […] “Tricolor” Retro Racer: Honda CBR1000RR by Crazy Garage - An RC30-inspired “Retro Racer” built in collaboration with Öhlins Korea… Known as the Fireblade in some markets, the Honda CBR1000RR was introduced in 2004 as the 7th generation RR superbike. Developed in conjunction with Honda’s […]