Barcelona has become a hotbed for custom bikes, largely thanks to builders like Overbold Motor Co., whose CB750 Nighthawk cafe racer we previously featured. Now the crew is back with another stunner:  this time a four-cylinder, liquid-cooled BMW K100. The K100 “Flying Brick” is quickly becoming a new favorite among custom builders. That big hunk of engine offers plenty of grunt, while looking proper-mean, and the bikes offer a wholly different aesthetic from the venerable airhead. This specific build is based on an ’92 BMW K100RS 4 valve — the sportiest in the line. Below, we get the full story direct from Federico Cerdà (aka Fred), the founder of Overbold Motor Co. (Answers by Federico Cerdà. Highlights by us.)

Overbold Motor Co. is a special workshop focused on custom motorcycles, located in Barcelona, Spain. Since 2014 we have worked on different motorcycles styles:  Cafe Racers, Scramblers, Trackers, Brat Style and some Rat bikes.

Founded by the designer Federico Cerdà (Alias Fred), the workshop is located in the Poble Nou District. One of the last industrial neighborhoods in Barcelona. We work on Japanese and European motorcycles. We love motorcycles and we love the custom side of them. We work a lot on the design aspect before start to build our project. This stage of design works well to define the style of the bike but also serves to agree on the budget with our customers. It is a process that we cannot leave aside. Our customers know how the bike will look before we start playing it. We make digital sketches to configure everything necessary and analyze with our engineer which modifications will work and which will not. Our team works together to get the best and the most solid results.

On the other hand, we always have a lot of respect when it comes to modifying the bikes, the limitations imposed by ITV in Spain are exaggeratedly ridiculous.

We built this project for a client.

The customer wants to give a new life to his old fashion BMW. This K100 is the RS 4v model which has almost 100HP, a very strong engine, but we had to work a lot to restore the rest of the parts of the motorcycle. The customer was interested in having a special custom motorcycle, not a cafe racer pure style. We work on the design style to get a hybrid type of design. Some rad, some mad, the shapes reflect a kind of tracker racer style. Following our style of design, we always try to give more and go further to get a well-done job. The way that the headlight shield look was a nice hack when we do it. The simple paintwork and the shape of the seat combine in total harmony. The final result of the motorcycle is very impressive. Look simple but it has a lot of work on it. Dark Pearl: BMW K100LT by Rusty Pipes Garage - “Imagine riding a wild animal dressed up in a tuxedo…”   The BMW K series remains an interesting piece of motorcycling history and technology. In the late 1970s, BMW Motorrad was worried about their iconic Airhead […] 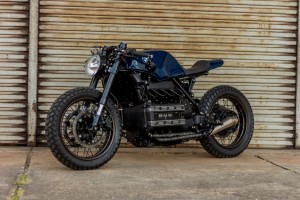 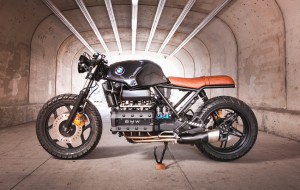