From 1949 to 1997, French manufacturer Motobécane built a series of Mobylette (or simply “Moby”) mopeds. In French, the word “Mobylette” has come to mean nearly any moped — not surprising, given that nearly 14 million of these machines were built. 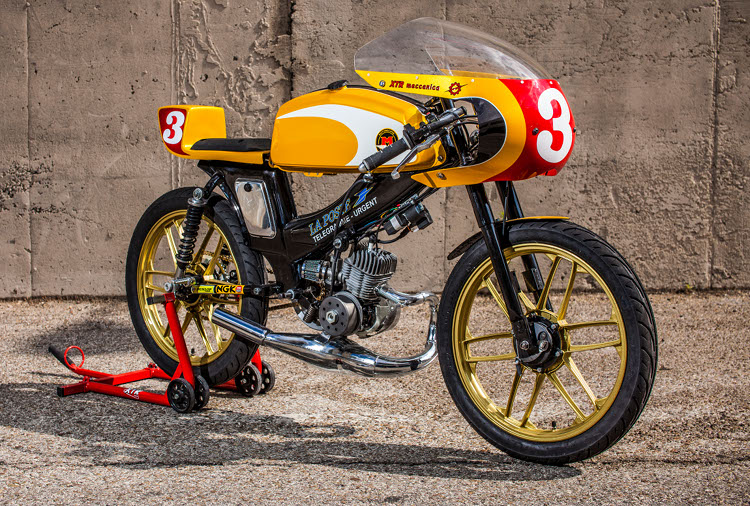 Many of the machines were licensed under Motobécane, but built by other manufacturers. In Spain, SP50 and SP90 machines were popular in the 1970s-80s, as the country had lax road laws, allowing moped owners to ride on public roads without insurance, helmet, or license. In France, postal workers delivered the mail on yellow Mobylettes. Our friend Pepo Rossell of Spain’s XTR Pepo set out to customize a 1975 Moby SP90 — a “street” version of the Campera line, calling the bike “PTT.” Of the name, he says:

Why PTT? PTT is the acronym of the French LA POSTE (the mail). Poste, Telegramme, et Telecomunication.

In France the “facteur” (post man) delivered the mail on yellow Mobylettes, with the logo La Poste in the side panniers in the rear.

As with most of his builds, Pepo took inspiration from the endurance racers of the 1970s, with XTR clipons, Regina gold chain, modified SP90 fuel tank, and incredible XTR custom bodywork painted by Pintumoto, including the front fairing and solo seat. The beautiful mag wheels and forks are from a Moby Cady. Pepo is never one to leave an engine alone. The motor was overbored to 70cc by a Mobylette specialist, and received a lightened crankshaft, aluminum flywheel, Amal 16 carburetor, MTV rotor and electronic ignition, and that beautiful Metrakit racing exhaust. Pepo says:

The engine has gone from 2 hp to 10 hp (estimated) and was made by a tuner specializing in Mobylettes from Valencia  in the east of Spain), where these bikes are used in street races in the little Valencian towns (there is a moped championship). The cockpit offers a Domino quick-turn throttle, Gonelli levers, and one of our favorite additions:  a Motoplat electronic tachometer. How we would love to crack open that Domino throttle and watch the revs climb! In all, the bike is narrow as a blade, capable of knifing through traffic like a tiny GP racer. Below, we have the full build sheet on this little screamer!