We decided to follow up our list of 2017 Best Custom Motorcycles with a cafes-only list. Some of these were real darlings of social media, accruing thousands of likes on Facebook and Instagram, while others can boast “long legs,” continue to garner traffic month after month.Without further ado, here are the BikeBound Best Cafe Racers of 2017, presented in alphabetical order by builder. 8Tech Racing wanted to see how sporty they could make a K-series build. The numbers alone speak for themselves — the duo managed to shed 67 kilograms from the bike’s wet weight…more than 147 pounds! Add Wilbers-tuned suspension, supersport rubber, bigger brakes, and an array of intake/exhaust modifications, and this has to be one of the sportiest K-series bikes ever created. Bold Motorcycles of Sertã, Portugal, is located in the middle of the country’s longest and most mythical road, the Nacional 2. The two-man crew of Pedro and João have built this 1996 CB500 cafe racer out of their home garage — dubbed “B001” — and what an incredible job they have done. They are hoping their brand and builds will help foster a greater custom motorcycle scene in their area — we can’t think of a better way. “The XS is a Rolls Royce with a blown Chrysler Hemi motor…” So said Cycle Magazine of the Yamaha XS1100, aka the XS Eleven or XS11. Enter Shawn Coffill of Campbell River, British Columbia, who brought the full potential out of a mighty XS, building a muscular, even brutal XS1100 cafe racer. Shawn, working in a CNC shop, was able to fabricate many of the bike’s pieces one-off, including top triple, motor mounts, headlight brackets, and even the velocity stacks. One of the main issues with stripping down modern sport bikes is their boxy frames, which are meant to be hidden beneath plastic fairings. With Catharina II, Lucca Customs — based on the Brazilian island of Florianópolis — circumvented this problem entirely. This 250cc cafe racer boasts an entirely hand-crafted frame. The Honda CX500 is experiencing a big renaissance these days. Who would have thought that the “plastic maggot” would become the darling of custom builders the world over? This particular specimen is the work of LV Custom Motorcycle Bodywork, a workshop founded in southwest London (Morden) by fiances Ludo and Clarisse, who specialize in customization and services such as bodywork, paintwork, saddlery, airbrush, and more. 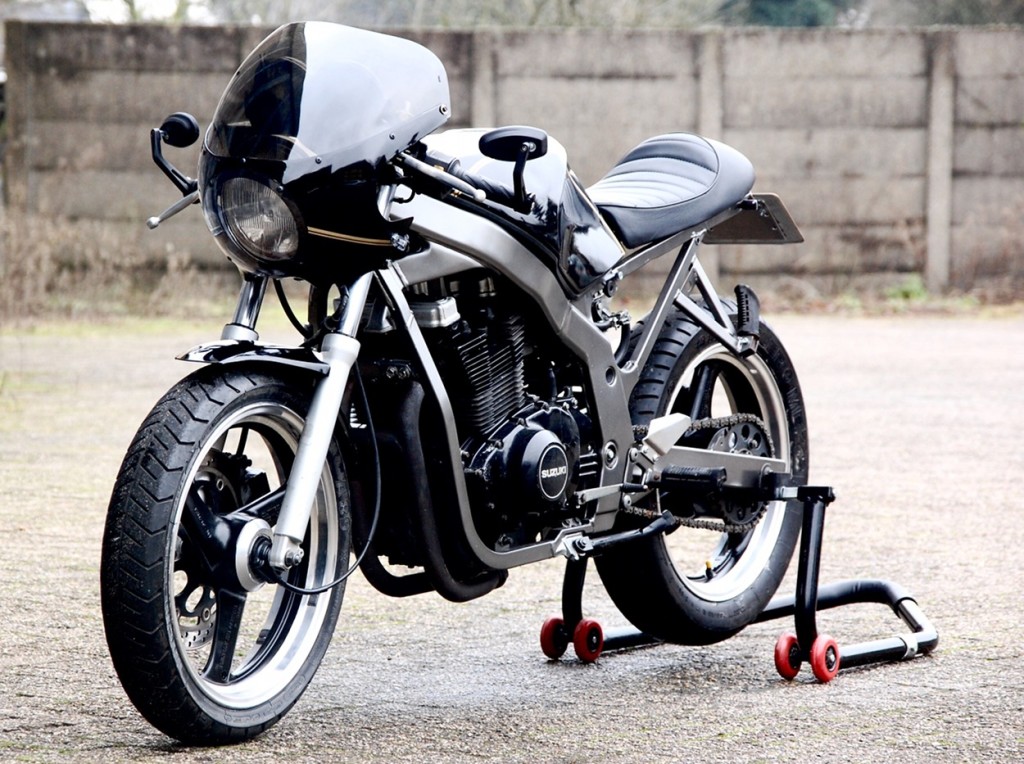 The Suzuki GS500 — an entry-level midsize street bike — is hardly thought of as racy or sexy. However, these bikes can be had for next to nothing these days. Sjoerd Veenstra of Motolifestyle decided to build a “low budget!” cafe racer on the platform.  “It’s not about a badass custom. But more how you can build simply a unique bike out of a dime a dozen 90’s motorcycle with a low budget.” That idea ended up being hugely popular among our readers, making this one of the Top 10 Cafe Racers of 2017! Flavio Vianna of Brazil’s Mr. Ride recently completed an internship with none other than Kaichiroh Kurosu of Cherry’s Company in Tokyo.  Upon returning home, he knew his first cafe racer project would need to be challenging and flawless to stand out in the Brazilian custom scene. Enter the Kawasaki Ninja 250R, Big Green’s flyweight sport bike. This 30-hp, liquid twin has long been lauded for keen handling and surprising pep, but it’s a rare platform for customization. Any modern sport bike certainly presents challenges for the custom builder, given the frame design. Flavio took those challenges in stride, creating a modern cafe racer that punches well above its weight class. The Sallings clan of Arkansas are quite the motorcycle family. Patriarch Jan Sallings of JMS Customs has six sons and two daughters-in-law who ride. We have featured Kat Sallings’s Honda CB175 cafe racer, as well as son Sean Sallings’s Honda CL350 brat.  Recently, the family made the cover of Cafe Racer magazine, with Jeanie Sallings and her 1964 Honda CB160 cafe racer, “Luna,” taking center stage. This was quite the special build, with Jeanie working closely with Jan, learning every square inch of the bike. In France, postal workers delivered the mail on yellow Mobylettes. Our friend Pepo Rossell of Spain’s XTR Pepo set out to customize a 1975 Moby SP90 — a “street” version of the Campera line, calling the bike “PTT” — the acronym of the French postal service. As with most of his builds, Pepo took inspiration from the endurance racers of the 1970s, with XTR clipons, Regina gold chain, modified SP90 fuel tank, and incredible XTR custom bodywork painted by Pintumoto, including the front fairing and solo seat. What if there had been a postwar cafe racer culture that originated in Japan instead of the UK? This was the question that builder Scott Wilson asked himself. Scott, a fan of Quentin Tarantino’s films, decided to create a bike inspired by the legendary samurai sword-maker Hattori Hanzo, as portrayed in Kill Bill. The result is “Shinobi” — the Japanese word for male ninja — a 1974 Honda CB450 cafe racer that might well have sprung from a parallel universe in which cafe racer culture evolved in the islands of Japan instead of England.