Today we’re thrilled to present our 10 Best Custom Motorcycles of 2017, as judged by you, our readers. Your visits, likes, comments, and shares serve as votes, and we ranked these bikes according to their popularity among our readership. This is the most objective ranking we could achieve. The Honda ATC250R was the hottest 3-wheeler of the 1980s, with a 2-stroke screamer of a motor, manual clutch, and air-assisted suspension. BJ English of Brick House Builds LLC decided to build “a bike that Honda Racing would have built if they wanted a street version of a wild 250R.” His platform was another strange child of the 1980s, the Honda CX500.  The CX5 has become a favorite of custom builders in recent years, but we have yet to see anything even close to Brick House Builds’s nostalgic build, nicknamed the CX500R. The SC3 Adventure is no simple amalgam of knobby tires and longer shocks. Jim designed this Sportster adventure bike from the ground up, utilizing the latest in 2- and 3-D design, structural analysis, and even air flow simulation. The result is one of the most incredible H-D builds we have seen, which William Harley and Arthur Davidson would surely love. 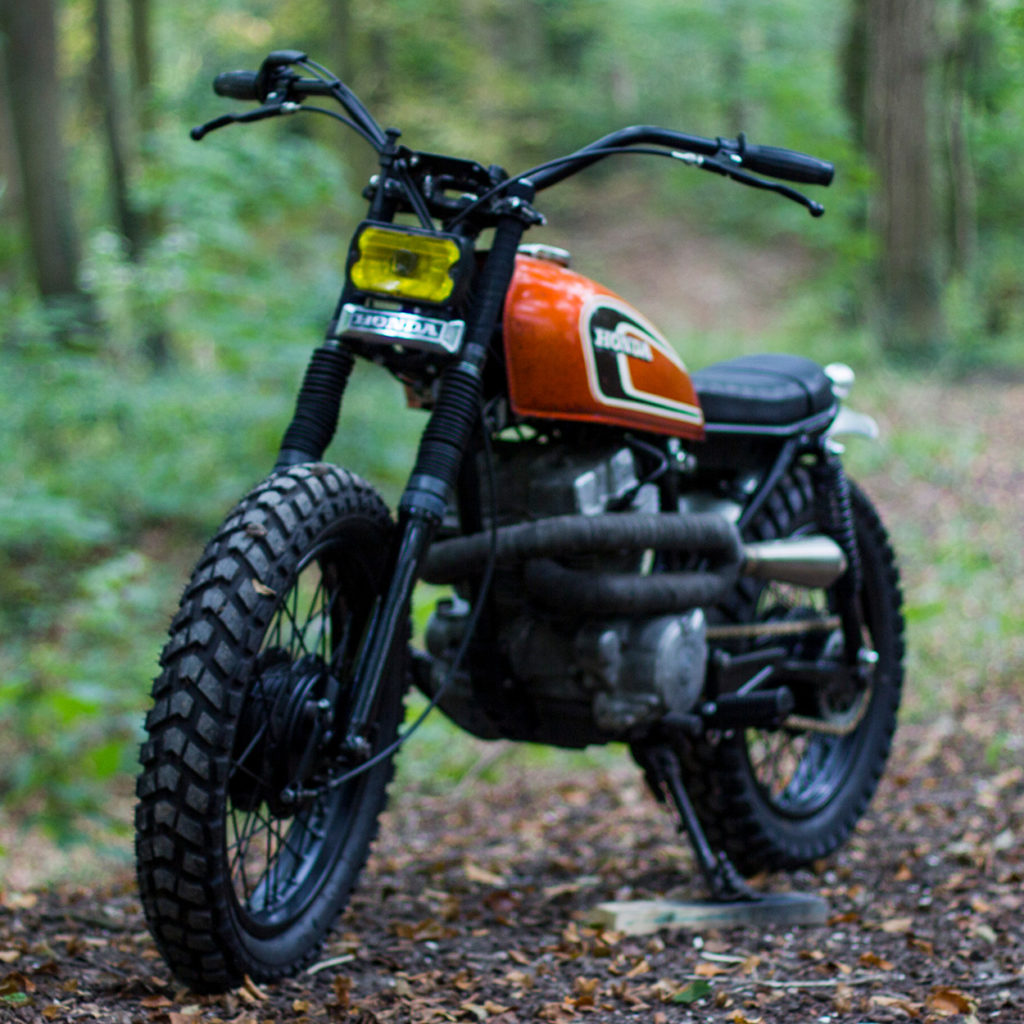 Max Inhulsen of The Netherlands bought his 1982 Honda CM250 for $250 from a man living in a former mental hospital in the woods. Max, who spent his teen years wrenching on mopeds, saw the potential behind the cruiser styling. He admits the bike build became an incredible help and rebound during a two-year period of personal challenge — something a lot of us can relate to, including yours truly. To mark the one year anniversary of Dab Design, Simon Dabadie decided to build his last custom of 2017 based on a very special bike:  the Honda CR500. As he says, he wanted to present an extreme bike. The Honda CR500 was the most powerful motocross bike the company had ever built, offering 52.8-56 horsepower at just 223 pounds — lighter and more powerful than a modern 450 four-stroke. The powerband was explosive, even violent — at one point in the midrange, power jumps 18 horsepower in 1500 rpm. Indisputably, the CR500 is a modern legend, and a fitting platform for this build. British motocross racer Billy MacKenzie has quite the racing pedigree.  He’s a 2x British MX1 Champion, riding for Factory Kawasaki and Honda teams, and 3x overall Gran Prix winner. After decades of competitive racing, he’s teamed up with the legendary Amor family to create the workshop X-Axis. Billy bought this bike largely complete from fabricator Ben Rose, whom he calls a “shit-hot welder,” but Billy had his own ideas he wanted to push forward on the build. Since entering the X-Axis workshop, the bike has received a full overhaul, including rebuilt engine, modified swing-arm, and more. The husband and wife team of Droog Moto has been steadily turning out a stable’s worth of signature builds. While the donor platforms vary, the Droog Moto style has become unmistakable — raw, burly builds that would look right at home in the nuclear winter, eating up broken pavement and muddy trails in equal measure. This, the tenth build in their Moto series, has earned the name Moto-X. Appropriately enough, the donor bike was one of the most legendary factory rides for the desert and woods:  the Honda XR600R. The client lives in Israel, and Droog Moto set out to create a machine that zip around Tel Aviv during the week and rip the trails on the weekend. British MoD engineer Allen Millyard has a brilliant habit of building the wildest motorcycle specials on the planet. He’s the man behind the 500-horsepower Millyard Viper V10 and the Flying Millyard, powered by a 4804cc v-twin. Amazingly enough, Millyard builds these OEM-looking monsters in a small garage workshop with little more than hand tools. The lucky owner of this 883cc, 5-cylinder, 109-rwhp Kawasaki KH500 Millyard Special is Pip Davidson — a diehard 2-stroke fan. The joining of the engine cases is just seamless, making this one of the great “double-take bikes,” which you could mistake for OEM before your brain registers the width of the engine. The Honda XLV750R is a rare sight these days. This 749cc dual-sport — a predecessor to the mighty Transalp and Africa Twin — offered a 61-hp, 45-degree V-twin and shaft drive. Enter Quentin Lambert, the 21 year-old founder of L’établi Garage in Eure, France. Quentin, who has a degree in motorcycle mechanics, built this bike in collaboration with a friend and design student. There is so much to love about this build: the geometric lines, the rare platform, the motocross and flat track design cues, and the fact that this is the work of such a young builder. Keith Carlson, who builds out of his home garage in Indiana, has become one of our favorite builders. With a background in vintage motocross, he has a preference for two-stroke street screamers that are, as he says, “all show and all go.” His CRF-framed RD400 custom was one of our most popular builds ever. Now Keith is back with yet another two-stroke street smoker, a Suzuki GT380 cafe racer built for his annual trip to the Tail of the Dragon. Next up is Keith Carlson’s buddy Steve Hoy of Hoy Vintage Cycles, who built this incredible 1975 Honda CB750 restomod in just 60 days. Nicknamed “Carrot,” the bike pays tribute to the early CB750’s — the predecessor of today’s inline four sportbikes — while offering modern suspension and power upgrades for serpentine kinks and corners of the Dragon. There’s nothing more fun than the battle of two-stroke versus four-stroke — especially among friends.