Harley-Davidson Motor Company was designing and building motorcycles to withstand the rigors of off-road riding more than 100 years ago — back when American soldiers needed their motorcycles to survive on the battlefields of France. Fast forward a century, and today’s garage, shed, and professional builders commonly turn to Harley’s Sportster, Big Twin, and new liquid-cooled Street series for custom scrambler builds.

While these bikes are quite heavy for single-track riding, they can be made into capable desert sleds and dirt road touring machines. Below are some of our favorite Harley scrambler builds. 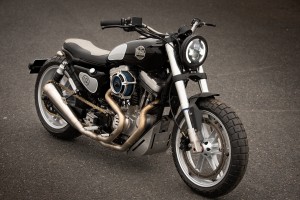 Harley Street Rod Dirt Bike: “MP119” - Wouldn’t it be cool to build a Harley-Davidson into a motocross bike? After the Eimca show in 2016, the crew at RD Custombikes had one serious wallop of an idea: “We…said how cool it would […] Harley Street Scrambler by Little Horse Cycles - In 2014, Harley-Davidson introduced their first lightweight series of motorcycles since the 70s:  the Harley Street series, comprising the Street 500 and Street 750.  The bikes are powered by a 60-degree, water-cooled V-twin dubbed the […] The New Dual Sport? Johnny Bones’s Sportster Tracker - We’ve been seeing some killer Sportster-based trackers and scramblers of late–big V-twins with knobby tires that actually get jumped and thrashed like dirt bikes. This machine built and owned by Johnny Bones is no exception. […]