One of our favorite things is stumbling across a photograph of an amazing build, then playing detective in an attempt to track down the builder. That is exactly what happened with this RD350 street tracker. We ran across a low-quality, uncredited image of the bike on Instagram, then proceeded to go down the rabbit hole of cyberspace, searching forums and list serves, before finally arriving at the builder:  Scott Zupner of Hawaii. Scott has been racing since the early 70s at Indian Dunes in Southern California. In 1996, he moved to Hawaii, where he’s been a sponsored professional surfer and motocross rider, and got hooked started racing Supermoto in 2010. As he says:

“Motorcycle racing is not just a hobby for me — it’s a passion and a way of life.”

Scott has long been a fan of vintage air-cooled two-strokes, as well as the flat track racers of the 60s and 70s. We can’t think of better tribute to those loves than this RD350 special, built in his personal shop. This is simply our favorite two-stroke tracker ever — an absolute ripper.

Below, we get the full story directly from Scott Zupner himself.

I have been racing motorcycles since the early seventies at Indian Dunes in southern California. I raced every weekend and also raced in the World mini gran prix several times. I also raced at Saddleback park. I continued to race and free ride motocross for my whole life I have also been a sponsored professional surfer as well. I got back into racing MX in 1995 in San Diego and then moved to Hawaii in 1996 where I also surfed and raced MX. I had been racing 250 amateur class and did very well bringing home plenty of trophies. In 2001 I finished in the top 10 for the state of Hawaii expert class racing. I took some time off to achieve some personal goals in my surfing career and I accomplished that with many sponsors, contests and photo publications. In 2010 I started racing Supermoto and was instantly hooked. I have not missed one single race in almost four years and continue to excel at the sport. Its for sure the most fun I’ve ever had on two wheels. Motorcycle racing is not just a hobby for me — it’s a passion and a way of life. I simply can’t wait till my next event. Besides racing, I have been restoring and building motorcycles most of my life. I really like vintage air cooled two strokes. I build out of my personal shop in Hawaii. Shouldered rims, Dunlop tires. I was inspired to build the bike because I really love vintage flat track motorcycles similar to this style raced in the sixties and seventies. I would classify this bike as a street tracker. It also has a MZB ignition, no battery but does have a lighting coil and is street legal. Also Jemco supplied the exhaust parts but were fitting to the bike in the shop. Blue Smoke: Yamaha RD350LC Hybrid - Andy Underhill’s resto-modded RD350, boasting YPVS power… Introduced in 1980, the Yamaha RD350LC was the next evolution in two-stroke street performance. Though it succeeded the larger displacement air-cooled RD400, the LC — aka the “Elsie” […] “SS001” Suzuki GT250 Hustler Street Tracker - Satset Garage builds a red-hot two-stroke street tracker…  The Suzuki GT250 “Hustler” was originally introduced to the Japanese market in 1971 as an evolution of the best-selling T250 two-stroke twin. By the time it reached […] 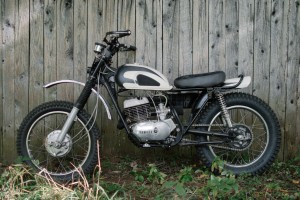 Build in Progress: Yamaha RD350 Springer - “When there is a love for two-strokes, speed, and handcrafted work, there is only one right thing to do…” These are the words of one of our favorite builders, Wilco Lindner of the Netherlands (@builtbywilcolindner), […] Miracle at the Bonneville Salt Flats - Living legend Steve “Brewdude” Garn revived on the salt…  In late August, we drove cross country to attend the AMA Motorcycle Speed Trials at Bonneville Speedway outside Wendover, Utah — our first trip to the […] Two-Stroke Titan: Suzuki T500 by Spencer Motoworks -  A Tracked Combat Vehicle engineer builds himself a two-stroke custom…  During the mid-1960s to 70s, when other manufacturers were touting the straight-line dragstrip performance of their two-stroke screamers — bikes with whisker-wide powerbands and widowmaker […] El Citron: Kawasaki S3 Two-Stroke Triple by Motobrix - “El Citron? This thing should have been called El Diablo…”  In 1974, Kawasaki unveiled the S3 Mach II, a 400cc two-stroke street triple with 42 hp and a dry weight of 339 pounds. The bike […] Two-Stroke Desert Racer: Street-Legal Husky 390 OR - In the late 1970s, the Husqvarna 390 OR (Off-Road) was the king of the desert, a two-stroke monster that reigned supreme from the Mojave Desert to the distant tip of the Baja Peninsula. Said the […] Orange Crush: Yamaha RD350LC Hybrid - Dusty Miller builds an electric orange giant-killer… The Yamaha RD350LC was the first liquid-cooled evolution of the RD series, which appeared in 1980 to succeed the air-cooled RD400. It had the same bore and stroke […] Small-Bore Speeder: Honda MB5 Land Speed Racer - Tim Klostermann of Economy Chopper sets out to beat the M-AG 50cc land speed record… For one year only (1982), the US market received the Honda MB5, a 50cc reed-valve two-stroke with a five-speed gearbox, […] Triple Black: Kawasaki H2 by Vinny Borbone - A vintage racer builds one bad two-stroke street bike… The Kawasaki H2 was one of the most uncompromising motorcycles ever produced, a 750cc two-stroke “Widowmaker” triple that was loud, smoky, crude, and scarily fast, cutting […] Mini Missile: Kawasaki “KV250” Two-Stroke Triple! - Ralf Kraemer shoehorns a KH250 triple into a KV minibike! In the late 60s, the Honda Monkey took the market by storm, becoming a sensation among riders both young and old.  In 1971, Kawasaki released […]