STG Tracker: Kawasaki KZ750 Twin - In 1976, Kawasaki introduced the KZ750 Twin, meant to compete against large-bore vertical twins like the Triumph Bonneville, Yamaha XS650, and the bygone British twins of yesteryear. But the KZ was no throwback — the […] Street Sweeper: Kawasaki ZRX1100 by Motor League - A ZRX risen from the Philly streets… The Kawasaki ZRX1100 was a throwback to the muscle bikes of the 1980s, a retro-styled machine that recalled the Eddie Lawson superbikes of yore, sporting a retuned 1052cc […] Triple Trouble: Framecrafters / Kawasaki H1 Cafe Racer - “I put a tricked out H1 engine with the left and right cylinders reversed into a Framecrafters road race frame and put lights on it.” This was the cryptic message we recently from Mike McSween […] Kawasaki KZ1000 Restomod by Nova Motorcycles - Few motorcycles have the long and varied history of the Kawasaki KZ1000. Known as the Z1000 outside North America, the big air-cooled inline four debuted in 1977, and the police model would remain in continuous […] “Street Lethal” Kawasaki KX500 Cafe Racer - Meet the ultimate lightweight, big bore 2-stroke street weapon… The Kawasaki KX500 is one of the most notorious motorcycles ever built — a fire-breathing 2-stroke legend of motocross and desert racing whose power delivery has […] Kawasaki 750 Zephyr Café Racer by Wolf 77 Customs - The Kawasaki Zephyr series harked back to the mighty Zed of old — a line of air-cooled, dual-shock inline fours with 70s styling and 90s tech. This made for quite a solid combination, though some […] Kawasaki Zephyr Cafe Racer by November Customs - The Kawasaki Zephyr was built during the retro/naked bike boom of the 1990s, with styling that recalled the mighty Kawasaki Z1 of yore.  The blend of 70s style and 90s tech was a success. The […] 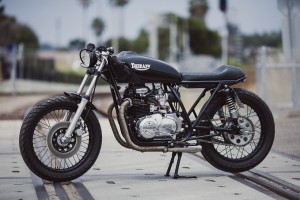 Kawasaki KZ650 Cafe Racer by Jon Arfsten - The Kawasaki KZ650 is one of our favorite vintage bikes. Sometimes known as the “Son of the Z1,” this middleweight UJM offered a 61-hp inline four, solid handling, and loads of potential from a customization […] Kawasaki Ninja 250 Cafe Racer by Mr. Ride - Flavio Vianna of Brazil’s Mr. Ride recently completed an internship with none other than Kaichiroh Kurosu of Cherry’s Company in Tokyo.  Upon returning home, he knew his first cafe racer project would need to be […] 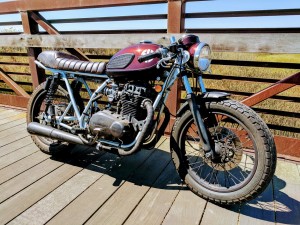 Kawasaki KZ650 Brat by Kaspeed -   If you follow the blog, you know we are big fans of the Kawasaki KZ650. The Honda CB series of the era may get more love and attention, but this “Son of the Z1” […] 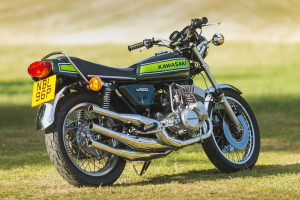 5-Cylinder Kawasaki 2-Stroke by Allen Millyard - The Kawasaki Triples were some of the most notorious motorcycles ever made, a series of 2-stroke street demons that prompted Hunter S. Thompson to write: I still feel a shudder in my spine every time […] Kawasaki KZ900 Cafe Racer by Excelsior Customs - We first met Jarred Hassell of Excelsior Customs at the Iron & Clematis in West Palm Beach, Florida, last year. Our senior correspondent, Rick Brown — my father — was simply blown away by the […] Kawasaki GPz750 Custom by Paul Hutchinson - Paul Hutchinson builds custom motorcycles in Melbourne, Australia. He only asks that you don’t call them cafe racers. His first build, a Hornet-orange BMW K100, graced the pages of many of our favorite blogs, including […] 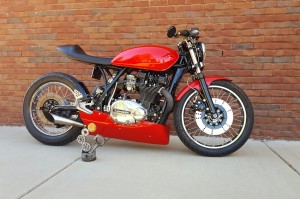 Kawasaki KZ750 Twin Cafe Racer - This blood-red Kawasaki KZ750 twin cafe racer, garage-built by Shad Alexander of Alabama, won the People's Choice Award at Ace Corner during this year's Barber Vintage Festival. Incredibly, this was Shad's first build attempt and he did all the work himself, including making the fiberglass underbelly, lacing and truing the wheels, and building his own paint booth. Kawasaki Z650 Custom by Wrench Kings - Bram and the boys from Bilthoven, The Netherlands, are back with another incredible build.  This time the base bike is one of our favorite models:  the Kawasaki Z650, better known as the KZ650 in North […] Kawasaki KZ650 Cafe Racer by Toby Jones - Here at BikeBound, we’re always on the look out for KZ650 customs.  These “Sons of the Z1” always surprise with their rev-happy motors and eagerness to lie flat in the corners. Rick Brown, who runs […]