The Netherlands has become one of the great hotbeds of custom motorcycle culture, with a staggering array of talented, hard-working builders like Daan and the crew at Moto Adonis. Although the workshop has turned their focus to a wide variety of platforms, they seem to have a particular affinity for the air-cooled BMW boxers. Now the crew is back with this 1989 BMW R80. This was a customer build intended to be as lightweight as possible. Though the original plan was for a cafe racer, the build ended up evolving in its own direction — as happens with some of the best builds. The result is a classy Bavarian custom that straddles the cafe and tracker aesthetic.

Below, we get the fully story on the build. (Answers by Moto Adonis. Highlights by us.)

My name is Daan and I’m the owner of Moto Adonis. Together with my team we build custom bikes at desire of our customers. We design and rebuild all kind of bikes and styles. We build around 30-40 bikes a year and we hope to do that for a very long time! It was a customer project which started with some small adjustments but at the end we did a lot! The concept was to build a real lightweight bike and we put that true in all sorts of stuff. Like the rims are much lighter than the cast alloy rims, the airbox is been replaced with a carbon fiber one and we put on a GSXR front fork which was lighter and makes the bike handle much much better. We went for a cafe racer look but in the end it became a true street tracker if you asked me. I like the way the lights are integrated into the rearseat tubes. So the tubes are functional in 2 ways. 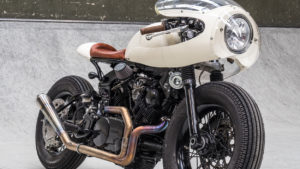